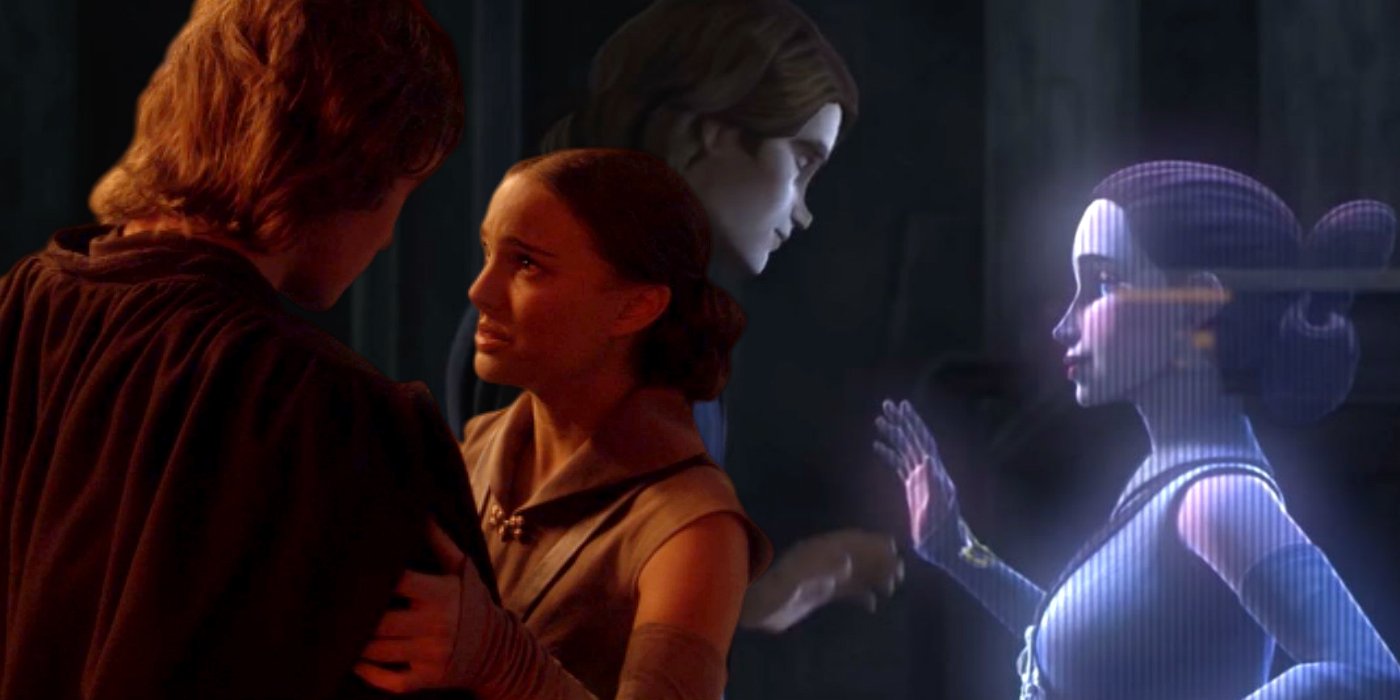 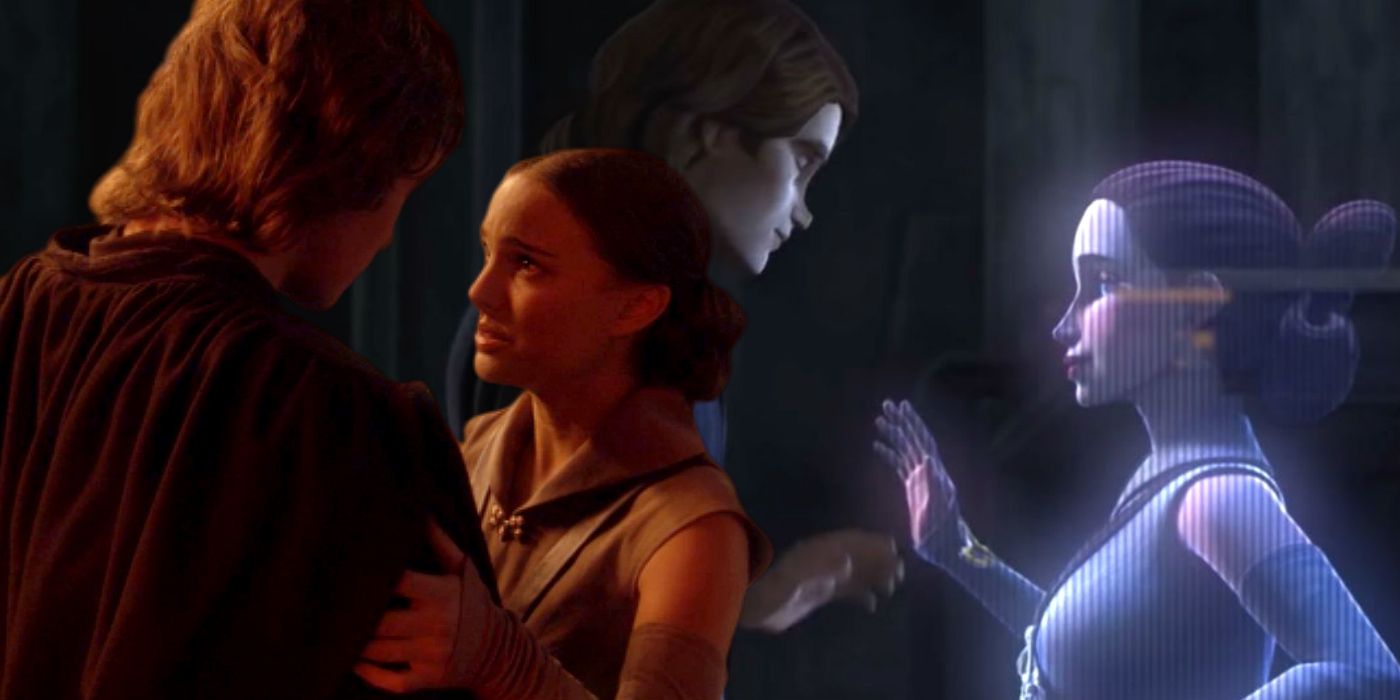 Disney and Lucasfilm release a brand new trailer for the seventh and final season of Star Wars: The Clone Wars and it creates a plot hole for Anakin Skywalker and Padme Amidala’s relationship. The Clone Wars will return next month for a proper narrative conclusion. Since the revival was announced in 2018, fans have been eagerly waiting for its roll out as it’ll reunite them with several iconic characters from the franchise, including star-crossed lovers Anakin and Padme.

The Clone Wars holds a special place in many long-time fans’ hearts. It was the only piece of content they could enjoy prior to Disney’s acquisition of Lucasfilm which led to Star Wars‘ renaissance. Over the course of five seasons, it consistently garnered high ratings and favorable reviews from critics. So naturally, many were distraught when it was unceremoniously cancelled. It eventually released additional episodes dubbed the “Lost Missions” that made up for a sixth year, but viewers and the creators behind the show still longed for a proper conclusion. No wonder, everyone was ecstatic when a Clone Wars revival was confirmed.

Star Wars: The Clone Wars season 7 will pick up after events of season 6. Fans have seen a few bits of footage from the upcoming 12-episode final The Clone Wars outing, which puts an emphasis on Ahsoka’s adventures following her decision to leave the Jedi Order. The latest teaser once again focuses on this, with the Clone Wars trailer ending on a tease for Ahsoka’s duel with Maul. Elsewhere, we also see other prominent characters from the show like Obi-Wan Kenobi, Mace Windu and Yoda. One brief moment from the clip, however, piques the attention of fans as it features Anakin and Padme communicating through holochat – as the couple share a tender moment with each other, the latter’s baby bump is seen quite prominently as she cradles it, seemingly retconning a previous Star Wars moment. 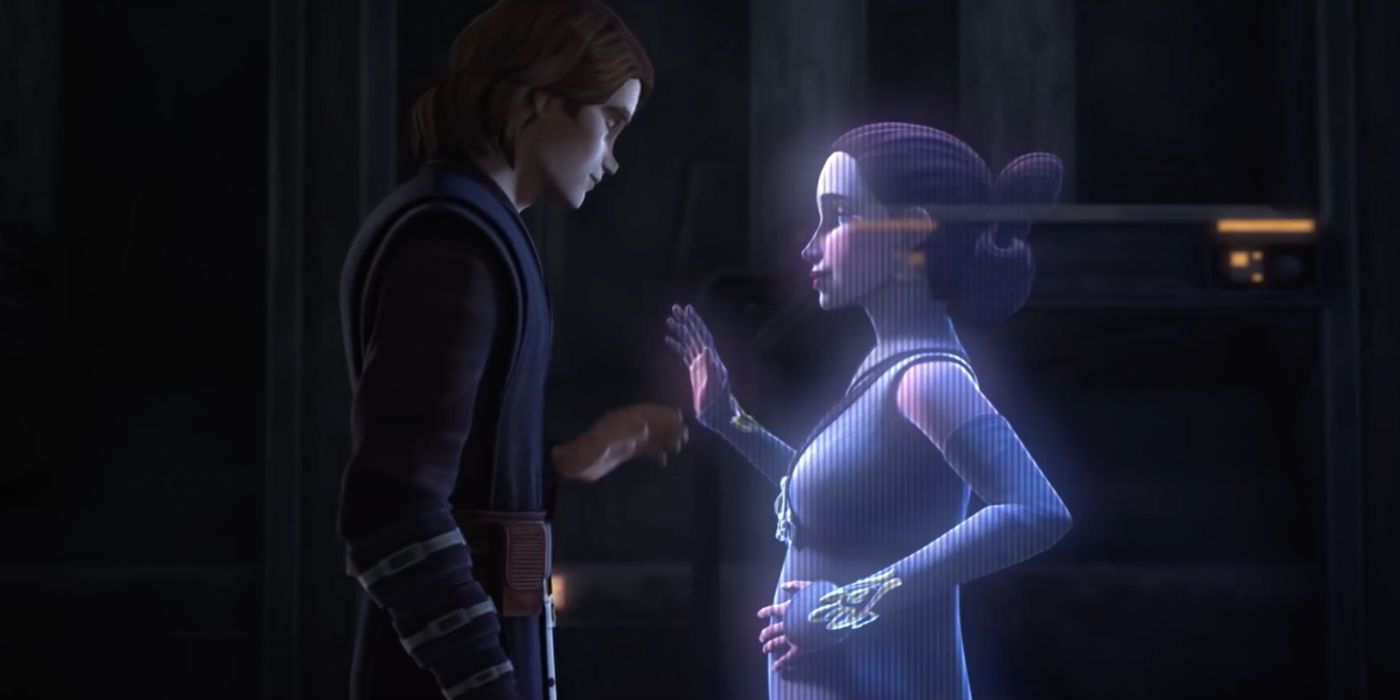 The scene raises some questions regarding the timeline of the series. The events of The Clone Wars take place in between Attack of the Clones and Revenge of the Sith. As we know from the prequels, Padme only told Anakin that she’s pregnant when he returned to Coruscant after he and Obi-Wan finished their tour of duty. This prospect of building a family with his wife initially excited Anakin, but he was soon plagued with nightmares about her dying during childbirth (a vision that ultimate came to fruition). This fear crippled Anakin throughout the rest of the movie, it clouded his judgment and became his primary motivation for joining Emperor Palpatine/Darth Sidious after the Sith dangled the possibility of teaching him how to avert death.

If, as stated, this is before Revenge of the Sith, then it’s a big retcon of the established canon for when Anakin discovers the pregnancy. It’s curious if this is simply a slip then, or if there’s more to the aforementioned scene than what the trailer revealed. If it’s the latter, there may be a hidden meaning that would explain this explicit breaking of continuity. It’s possible that The Clone Wars season 7 doesn’t just lead up to Revenge of the Sith, but actually overlaps with it. Padme’s costume looks to be the same one she wears on Mustafar, which would mean this goes further into Revenge of the Sith than anyone expected, further fleshing out events directly happening in that movie. That would mean Padme and Anakin had a conversation before Mustafar, but after he’d gone to the dark side, that was never revealed in the film.

However, wherever in the timeline it takes place, chances are that fans will be more than willing to forgive this retcon. All the new episodes really need to do is provide a satisfying conclusion to the Star Wars: The Clone Wars narrative, especially in light of the divisive reception to Star Wars: The Rise of Skywalker.

More: Someone Was Kidnapping Jedi During The Clone Wars – But Star Wars Never Revealed Who