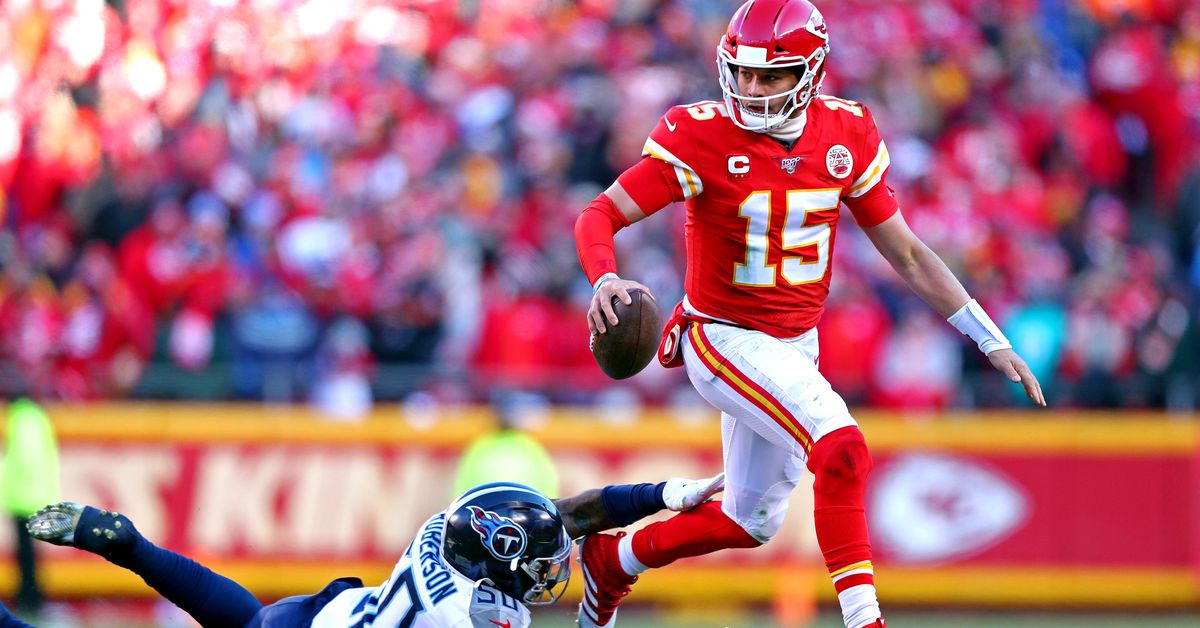 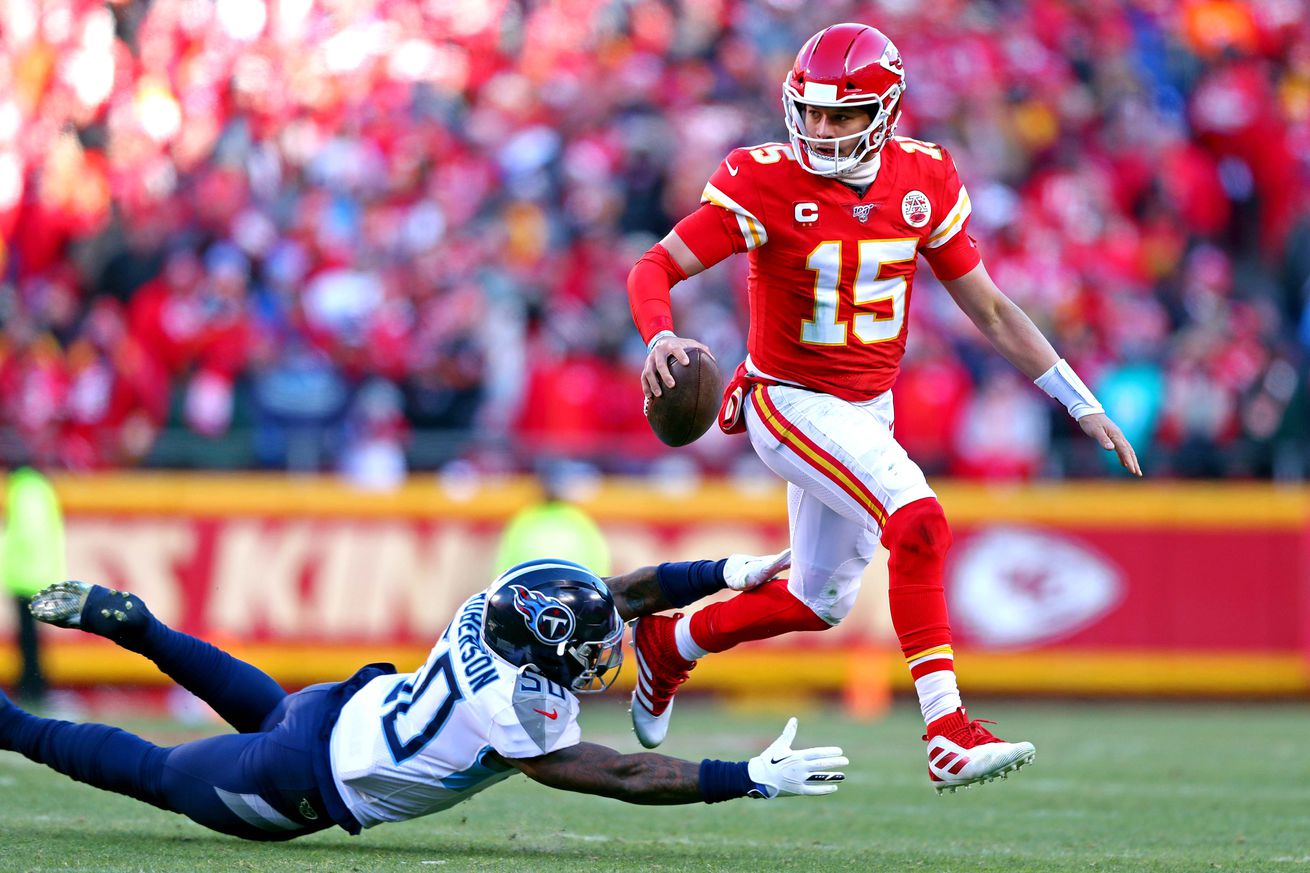 We did not get a terrible no-call in this year’s Conference Championship Round, but we did kind of get a buttfumble.

Thank goodness we didn’t have another Conference Championship Weekend like last year. One moment in each game created a ripple effect that sent the Patriots (Dee Ford offsides!) and the Rams (that was PI!) to the Super Bowl, where they wasted our time with three-and-a-half hours of BORING.

We have much higher hopes for the upcoming Super Bowl 54 matchup between the 49ers and Chiefs. But Sunday started out feeling a bit like deja vu.

Early in the AFC Championship Game, Kansas City intercepted Ryan Tannehill on second down, but it was overturned on replay. The Chiefs took the momentum of a near-interception and immediately committed two penalties: a neutral zone infraction and encroachment on back-to-back plays that turned a third-and-5 situation into a first-and-5.

You’d think the Chiefs would’ve learned their lesson about staying on their side of the line of scrimmage in last year’s AFC title game, but nope. The Titans scored on the drive to go up 10-0, though the Chiefs would come roaring back.

Then late in the game, some fans on Twitter were outraged (shocker, we know) about a penalty called on the Titans. However, rather than turn into any real point of contention that would eventually lead to a rule change in the offseason, the “controversy” was quickly debunked by officiating experts.

So phew, we were spared this year from any egregious slipups that cost anyone a trip to the Super Bowl. But don’t worry. We still witnessed several dumb mistakes on the final Sunday of meaningful football before Super Bowl 54 (we’re cheating a little bit with the first one, but the 49ers played an almost flawless game and we wanted to include them).

What do the Eagles, Dolphins, Ravens, Browns, Jets, and Bears all have in common? Well, besides how they were all sitting at home this past weekend. The real answer is that they signed Raheem Mostert at one point and then didn’t keep him around.

Mostert, an undrafted free agent and many-time practice squad player, was picked up by the 49ers in 2016. After two seasons of mostly special teams work, he started getting more opportunities to run the ball in 2018 and then even more in 2019. His patience paid off with his record-setting performance against the Packers: 29 carries for 220 yards and four touchdowns.

After the 49ers’ 37-20 win, Mostert says he keeps a list of the teams that cut him for motivation:

“I’ve been on seven different teams … before every game I look at the cut dates.”Raheem Mostert reflects on his journey after a record-breaking NFC Championship performance pic.twitter.com/ykezoDJbxX

Mostert’s story is one of perseverance, but the six teams that gave up on him are probably feeling regret.

3. The Chiefs tried their best to give the Titans a shot at a comeback

An 18-point lead in the fourth quarter is about as safe as it gets when the Titans are your opponent. Tennessee loves to patiently grind away with its powerful rushing attack complemented by play-action strikes. Put them in a hole and so much of what makes the Titans dangerous disappears.

All the Chiefs had to do was run out clock and not fall for any shenanigans from the desperation-mode Titans. They didn’t do well at either.

When Tennessee decided to punt deep in its own territory with about six minutes left in the game, it seemed like an obvious time for the team to try a fake punt. Obvious to everyone except the Chiefs’ special teams. They completely fell for it and allowed Brett Kern to throw to a wide-open Amani Hooker for a 28-yard gain.

The fake gave the Titans another shot to score and they did so four plays later with a 22-yard touchdown pass from Ryan Tannehill to Anthony Firkser.

Running back Damian Williams allowed himself to be tackled out of bounds. Mahomes avoided a sack by throwing a pass out of bounds. Had it not been for a pass interference penalty on the Titans, the Chiefs were about to hand the ball back to Tennessee without wasting much clock at all.

Kansas City afforded the Titans extra opportunities early in the game, too, and not only on Tennessee’s first touchdown drive. After the Chiefs cut their deficit to 10-7, the defense stuck the Titans with a third-and-22. Tennessee settled for a 10-yard pass to set up a short field goal, but a pass interference penalty on cornerback Bashaud Breeland gifted a free first down to Tennessee. The Titans scored a touchdown five plays later to stretch their lead back to 10.

Ultimately, Mahomes was too much for the Titans with three passing touchdowns and a rushing touchdown. The Chiefs sure tried their best to give the Titans a shot, though — and they can’t shoot themselves in the foot like that in the Super Bowl against the 49ers and expect to win.

2. The Packers’ buttfumble perfectly summed up their day

Green Bay did not have its best game in the NFC Championship Game on Sunday, especially early on. The Packers fell behind 17-0 and looked completely out of sync on both sides of the ball.

In the second quarter, they started finding a rhythm on offense. Aaron Rodgers hit Jake Kumerow for a 23-yard gain, then four straight runs from Aaron Jones got Green Bay to the San Francisco 25-yard line.

That’s when the Packers promptly fumbled away their first real chance to score. It was even a butt fumble of sorts — Rodgers lost the ball while trying to take the snap from under his center’s backside:

Here’s what happened on the fumble, Rodgers couldn’t grab the snap cleanly from the Center.pic.twitter.com/GFMxyKDTPK

Not only that, but Rodgers was then left staring at his own fumble rather than trying to retrieve it. The 49ers added a field goal after the turnover and later went into halftime leading 27-0.

That fumble really set the tone for the entire game, for Rodgers in particular. Sure, he may have finished with 326 passing yards and a pair of touchdowns, but he was also beat up by the 49ers defense. By the time the final whistle blew, he’d been sacked three times for an amazing -30 yards. He also threw two interceptions and put the ball on the turf three times (only losing the buttfumble).

On the plus side, he did leave us with a game recap that can be roughly summed up with a single image. 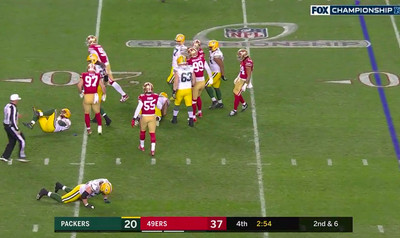 1. What in the world were the Titans’ defenders doing on this Patrick Mahomes TD run?

Mahomes is mostly known for his otherworldly arm, but his legs delivered Sunday’s biggest highlight — and a play that was the turning point of the Chiefs’ 35-24 win over the Titans.

His 27-yard touchdown run with 11 seconds left the second quarter gave his team a 21-17 lead right before halftime and all the momentum that came with it. It was a brilliant improvised play from last year’s MVP.

And it wouldn’t have been possible if Tennessee’s tackling hadn’t been SO BAD.

Is it me or does Patrick Mahomes look downright bored while he burns the Titans for a rushing TD? I love it. pic.twitter.com/Y322B2Ga3h

First, linebacker Derick Roberson missed Mahomes’ ankle before he turned upfield. Then, linebacker Rashaan Evans tackled air instead of the QB. On Mahomes’ way into the end zone, cornerback Tramaine Brock essentially helped him spin across the goal line for a TD, with DaQuan Jones helplessly trying to dive at Mahomes:

Tramaine Brock (no. 35) spun Patrick Mahomes right out of what would have been a big hit and helped clear his path to the end zone pic.twitter.com/lytBDKZQVr

Of course, it’s hard to defend Mahomes when he does something ridiculous like this. But Tennessee’s defense probably wishes it could get that play back — the Chiefs never trailed again.