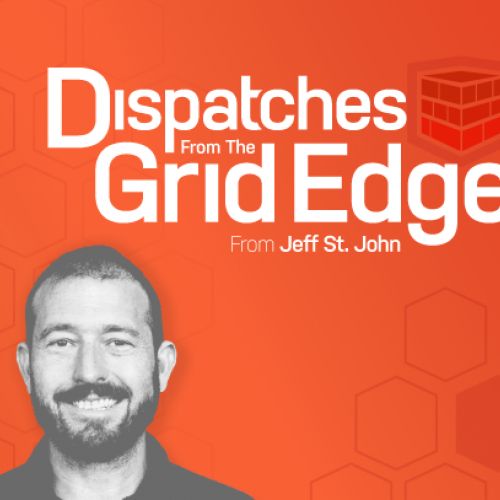 For more than a year now, PJM has been in a state of suspension, awaiting word from the Federal Energy Regulatory Commission on how state-subsidized resources from wind and solar to coal and nuclear power will be permitted to participate its $10 billion a year capacity market.

Whatever the final decision ends up being, it has the potential to impose billions of dollars of extra costs on the 65 million people served by the mid-Atlantic grid operator, as well as set a precedent for how federal-versus-state energy policy could develop in other parts of the country.

Since late July, when FERC once again forced PJM to postpone its capacity auction, industry watchers had been hoping that September could bring a resolution to the impasse. But those hopes were dashed last week, when FERC Commissioner Richard Glick, the sole Democrat who sits alongside Republicans Neil Chatterjee and Bernard McNamee, reported that an administrative error has forced him to recuse himself until December from matters involving his former employer Avangrid.

With only three of five commission seats now filled, Glick’s recusal would leave FERC without a quorum for voting on many important matters, including the PJM decision.

The short-term impacts of ongoing delays

To be clear, the ongoing delay of an auction for resources to be delivered in 2022 isn’t having an immediate effect on the grid reliability that capacity markets are meant to provide. That’s particularly true because PJM has a required reserve margin of 16 percent, but went into this summer with a 28 percent reserve margin, “revealing no immediate need for capacity procurement,” Kolo said.

Further, the impact of PJM’s auction delay for the parties that rely on it for at least a portion of their revenues has likely been relatively limited to date, she said.

“At this stage, the delay of the capacity auction is not very material to demand response providers, because there’s limited buildout of assets that needs to take place — demand response is flexible in terms of customer acquisition,” she said. That’s far less true for generators that may need the three years-ahead price certainty to line up project financing, assess acquisition valuations, or arrange for bilateral capacity trades.

But in the longer run, ongoing delays could start to leave parties across the spectrum without the critical price formation that capacity markets are meant to provide, Kolo said. If PJM’s capacity markets yielded relatively stable prices, that might be less of a concern. But as this chart indicates, capacity prices have instead been quite volatile, both from year to year, and across key sub-regions within PJM.

Just how PJM’s eventual capacity market rules end up valuing or discounting different assets across the spectrum is a wide-open question, given the range of options on the table.

But while renewable energy advocates have expressed concern that FERC’s eventual decision could undercut their revenues, wind and solar power have until now played a much smaller role in PJM’s capacity market, accounting for a little more than 2 gigawatts of the more than 163 gigawatts of capacity procured in its last auction.

Natural gas-fired power plants in PJM, by contrast, may rely on capacity payments for up to about half their overall revenues — a reliance that’s only expected to increase in years to come, he said. “With more renewables, and energy prices expected to go down in the long term because of more zero marginal-cost resources, it’s expected that energy will make up a declining portion of revenues. Capacity markets are supposed to make up for that missing revenue.”

That’s why fossil fuel generator owners and trade groups like the Electric Power Supply Association have been pushing for rule changes that would reduce competition from these alternative resources in capacity markets. At the same time, these are the same groups most likely to face “serious market impacts” from continued auction delays, as EPSA told FERC earlier this year.

The cost of suppressing subsidized resources

But it’s the electricity consumers in PJM territory that are likely to feel the biggest impact from the changes to come, given that capacity makes up about 20 percent of wholesale electricity prices in PJM territory, Kolo said. And it’s the potential consumer impacts that have driven this month’s escalation of the long-running political and policy fight against FERC’s controversial 3-2 decision last June to order PJM to apply a “minimum offer price rule” (MOPR) to the capacity market bids from state-subsidized resources.

Both Democratic commissioners at the time voted against the decision, noting thatit could effectively bar state renewable portfolio standard solar and wind power from participating in PJM’s capacity market. But it could also challenge state-subsidized nuclear power plants in Illinois and New Jersey — and potentially the nuclear and coal plants offered state subsidies by Ohio lawmakers this year.

The costs of barring these resources could add up to billions of dollars in years to come, although exactly how many billions is hard to predict, since FERC has yet to lay out a proposal. Lacking that information, competing studies have started with different assumptions that have yielded widely varying estimates.

Late last month, for example, 10 Democratic Senators wrote a letter to FERC Chairman Chatterjee demanding he reconsider plans for applying a MOPR broadly to PJM’s capacity market. The senators cited a report from consultancy Grid Strategies that found the costs could add up to $5.7 billion a year, or about $6 per month for the average household electric bill.

To reach this outcome, Grid Strategies presumes a worst-case scenario in which the MOPR bans all state-subsidized generation, including about 9.6 gigawatts of existing fossil and nuclear resources, as well as more than 14.3 gigawatts of future renewables needed to meet state RPS targets.

The report also claimed that a MOPR could drive prices even higher in states with nuclear or renewable incentives, such as New Jersey and Illinois, or regions with historically higher capacity costs, such as the urban centers of Philadelphia, Baltimore and Washington D.C.

But this week, PJM’s independent market monitor Monitoring Analytics — the sole entity beyond PJM itself with full visibility into the confidential bids that form capacity market prices — replied with a complex rebuttal of Grid Strategies' analysis. It noted that Grid Strategies relied on the independent monitor's analysis of PJM’s October 2018 proposal to FERC, which suggested using a market mechanism called a extended resource carve out (RCO) to differentiate bids from subsidized and unsubsidized resources.

But Monitoring Analytics said that Grid Strategies “conflates the RCO proposal with all proposals to modify PJM capacity market rules,” not all of which will necessarily lead to higher capacity prices. In fact, it wrote, some of the proposals could “inappropriately and significantly suppress capacity market prices.”

Even so, Monitoring Analytics agreed with Grid Strategies that PJM’s extended RCO plan should be rejected for unnecessarily adding costs. In fact, its analysis shows that the proposal could increase capacity costs in ranges as high as $8.4 billion — a highly unlikely outcome, relying on 100 percent of units at risk of retirement being allowed to remain in the market — to a more realistic $1.6 billion increase, presuming that only half of units at risk of retirement were subsidized.

S&P Global Platts Analytics has provided its own analysis of various scenarios, folding in even more caveats to produce a lower price increase projection. For example, while Grid Strategies cited Monitoring Analytics’ projection that implementing PJM’s extended RCO plan could add about $94.67 per megawatt-day to capacity costs, S&P projected the same policies would yield a far lower upside to capacity prices of about $10 to $25 per megawatt-day.

But as Munoz-Alvarez noted, “the key takeaway is that they both agree on the direction of the price effects caused by PJM’s proposed 'extended RCO' option.The magnitude of the price changes is much harder to predict.”

Beyond PJM, FERC’s decision will “set a precedent on a fundamental trade-off between states’ ability to unilaterally further state policy objectives,” Munoz-Alvarez said. In other words, states are going to continue to push their chosen energy policies, but FERC’s decision on PJM will have a major impact on how those resources will be counted in the interstate capacity markets it regulates.

As Munoz noted, capacity markets are meant to solve the “missing money” problem, for when the prices for actually generating and selling electricity aren’t high enough to justify building enough power plants to assure future grid reliability. As such, they’ve always had to balance pre-existing market subsidies and distortions, as well as constantly adapt to changes in the technologies that provide these critical services.

But if FERC ends up ordering PJM to effectively ignore the capacity value of gigawatts of state-subsidized resources coming online in the coming years, that could end up seriously distorting its ability to manage this key part of its job, said Mike Jacobs, senior energy analyst for the Union of Concerned Scientists.

“Every year going forward, there’s no motivation or requirement, unless FERC says something, to bridge that, and provide for PJM to have some accommodation to recognize what state laws are doing,” Jacobs  said.

And FERC’s push to apply the MOPR to state-subsidized resources is having an impact in other markets. FERC has approved application of a broad MOPR for ISO New England as well as PJM, and will soon consider it for the New York ISO, the Grid Strategies report noted. But the concept’s applications could be far more wide-ranging, eventually applying to regions without mandatory capacity markets, or perhaps to other markets such as energy and ancillary services.

This disconnect also gets to the heart of opponents’ legal objections to FERC’s push for applying the MOPR.

As Munoz-Alvarez put it, “it seems FERC’s approval of a broad MOPR for all state-supported resources ultimately hinges on FERC's ability to argue that such a broad MOPR will be both sufficient and necessary to prevent the exercise of buyer-side market power,” and that “it will not rule out ‘valid’ state-supported resource offers, or those well-grounded on fundamental economic principles.”

But FERC’s definition of well-grounded economic principles doesn’t include a cost for carbon emissions, he said.

In this view, the states pushing incentives for carbon-free nuclear or renewable energy could be seen as attempting to “correct a market already distorted by externalities, i.e., the lack of a federal carbon price,” Munoz said. That is to say, as long as FERC’s mandate from Congress doesn’t include carbon emissions, its view of what’s valuable may be fundamentally divergent from the states in question.