The reinvention of Adam Hansen 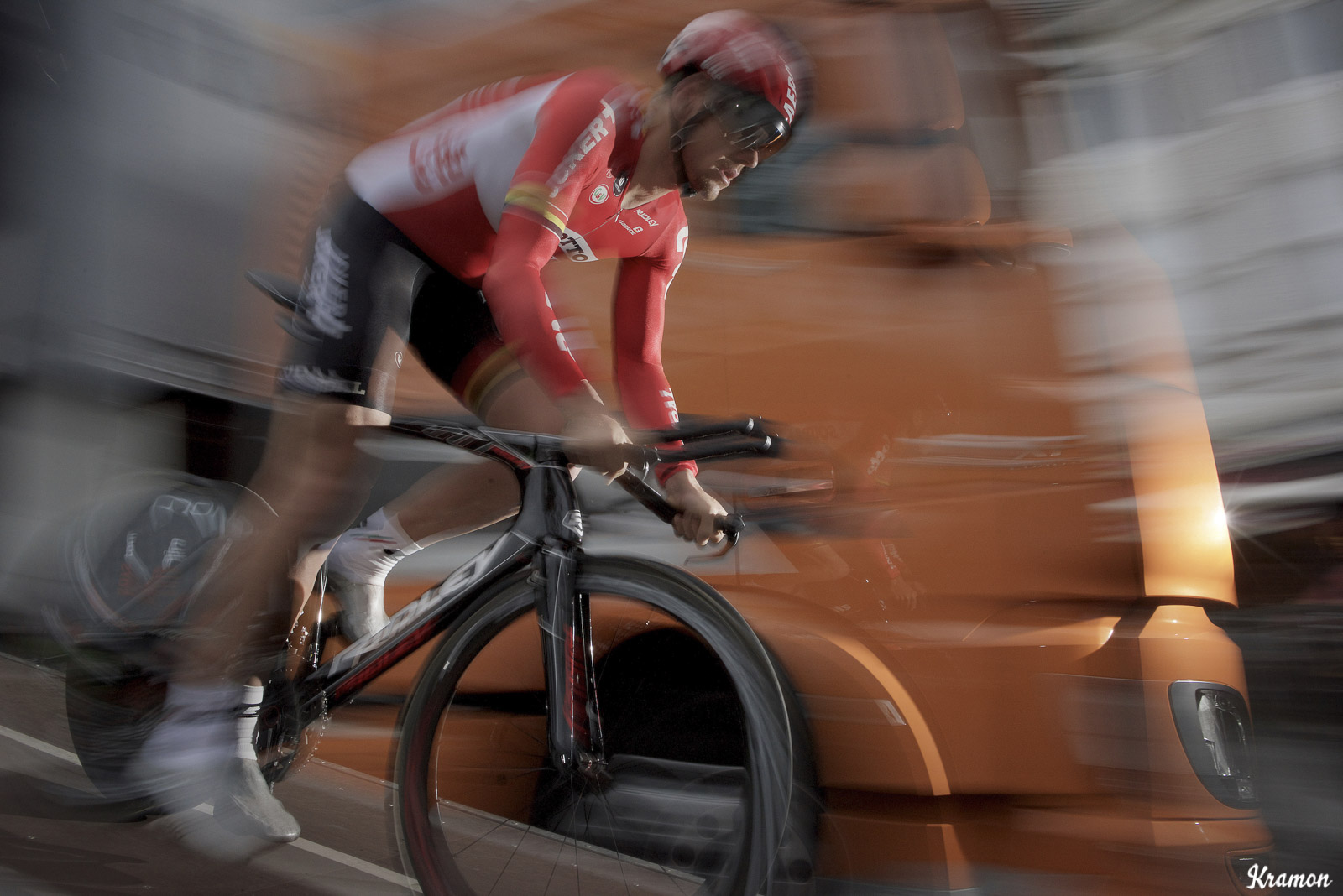 No, we aren’t talking about religion, or reincarnation. But the Australia hardman is starting the third major phase of his career, and he’s pretty psyched about it.

Part one was his life as Mr Crocodile Trophy. He was twice winner of the legendary fat-tyre race in Australia, a multi-stage outback event that has been described as a cycling version of the Dakar Rally. Hansen was a tough, gritty rider who earned increasingly good results in various other races and made a breakthrough when he secured a T-Mobile contract for the 2007 season.

The next big phase of Hansen’s career echoed the first, in that it showed the same toughness and enjoyment of personal challenge which earned that Crocodile Trophy success. In 2011 he began what was a remarkable run of Grand Tour participations, riding that year’s Vuelta a España and then starting, and finishing, every three week Tour right up until this year’s Giro d’Italia.

At the end of that streak, he had completed an unprecedented 20 consecutive Grand Tours, thus destroying the previous best of 12 straight Grand Tours held by the Spaniard Bernardo Ruiz.

Now, with Hansen missing this year’s Tour de France and the Vuelta a España, the third phase of his career begins.

“I’ve got heaps of motivation in the sport now, maybe even more than before,” Hansen tells CyclingTips. “There are so many races I missed out on in the past. I’m just so keen to be part of a normal season again.

“It wasn’t really weird not to be at the Tour. It’s more weird that I went there for the last seven years. I think a lot of cyclists get consumed that they think it’s the only race on a the calendar.

“I watched a few stages, looked at the results to see where my friends finished. I also realised the amount of stress that race takes on a rider. Knowing that I was not going to the Tour early on meant the month before had a different aspect too.”

Hansen’s incredible streak of Grand Tour starts saw him ride for others, including team sprinter André Greipel. However that service was punctuated by two standout personal performances. During a wet, treacherously slippery day at the 2013 Giro d’Italia, Hansen went clear in the day’s break and then soloed in to win his first Grand Tour stage.

The following year, he was even more impressive in winning a stage of the Vuelta a España. Hansen powered clear of a reduced main peloton and brilliantly held off those chasing behind, reaching the line alone. The performance was one of the best of that year’s race, and underlined just how strong and tactically-astute he was.

Since then, riding Grand Tour after Grand Tour appeared to take a toll on his results. His engine became more and more that of a diesel, with his massive upsurge stamina coming at the cost of some speed.

Ending his run of three week races is, he hopes, something that will enable him to get back that winning punch.

“I did the whole Grand Tour thing,” he explains. “I want more and something that’s different. Getting results will be that.”

So, given that he spent so long doing things in one particular way, does he have any regrets about riding those twenty three-week races in a row? “Yes and no,” he answers. “In one aspect I could have done more [in terms of results] because of the taxing of it all on my body. But on the other side I will continue to ride for another four years. I know with a different program now and less Grand Tours that I can give a lot more.”

So, obvious question: would he have changed anything about the decisions he made in recent years? In other words, if he could go back again, would he give up on building quite as big a Grand Tour record?

“No, and I don’t try to live like that,” he answers. “I think if you make a long term choice or career choice you should stick to that. Of course there are times when you have to say no in life. In some situations, at these times, that is more important than not saying no.

“But in my situation, I am glad I did it all. I would not change a thing nor dwell on the past.”

Hansen is serious about his career, but also embraces the light-hearted moments too.

Turning over a new page

This year’s Giro was the last of Hansen’s remarkable 20-race streak. He helped Tim Wellens to victory on stage four of the race and himself finished 60th overall. After that, he drew a line under that phase of his career.

He did the Tour de Suisse, sat out the Tour de France and rode only one race in July, the Prudential RideLondon-Surrey Classic.

Since then he’s done just five days of racing. He lined out on the EuroEyes Cyclassics Hamburg, then did the Deutschland Tour.

He wasn’t exactly slacking off, but it was a very, very different sort of summer than what he had become accustomed to.

“It was really nice, actually,” he says. “Having the summer off was different for sure. Summer in Europe was a first time for me without races so I could enjoy it a lot more than I knew I could.

“I had some time off. I built a garage next to my house. I did some long rides to places I have never ridden before, and I saw more of the Czech Republic.”

He said that taking some time to chill out and reflect changed his perspective on how much he had invested into his previous race programme.

“I never realised how time-consuming it all was,” he explains. “Some riders don’t even do one Grand Tour and on average you might get one a year. With me doing just one this year, it really showed me that us cyclists have a lot of time on our hands.”

When he was riding the Giro Hansen made clear he wouldn’t be at the Tour. At the time there had been talk that he might ride the Vuelta a España. But, in the end, the Lotto-Soudal team headed to Spain without him.

That’s fine: he believes having a lighter programme now will set him up well for this next phase of his career.

“I wanted to have a fresh year. Some time to recover from everything I have done,” he explains. “I am really looking forward to the Canadian races. I have not done them for so long, and I am excited to go there.”

After that, he is scheduled to do The Tour of Guangxi in China. And then that will be that.

Hansen has been part of the Lotto-Soudal setup since 2011. He hasn’t yet concluded a deal for 2019 and it is unclear if he could remain there or if he will be heading elsewhere. However he is almost certainly parting ways with André Greipel, who has been replaced by the younger Caleb Ewan on the team.

Hansen raced alongside the German for twelve seasons and helped him to land countless sprint successes.

“It’s not nice,” Hansen says, referring to Greipel’s departure and what appears to be the end of their time racing together. “I have done my whole career with him since 2007. I turned pro on his [T-Mobile] team. But I understand cycling is still a business and not Alice In Wonderland.

“It’s sad to see that time end, but I will see him again. It’s not like I will never see the guy. He didn’t cheat on me so we are still on speaking terms,” he adds, light-heartedly.

Greipel will compete with the Fortuneo Samsic team in 2019. As for Hansen, it’s yet to be established where he will line out next.

“My future is undecided yet,” he says. “I’m not sure as of now where I will exactly go. I have a few ideas and half-possibilities. Time will tell.

“I want to get a bit more out of the sport. Some personal success would be nice. But also working for others too as I have always enjoyed that.”

Hansen is now 37 years of age, yet speaks about racing for four more years. He’s got a sense of excitement about what lies ahead, and also has plenty of enthusiasm left.

“With the Grand Tour streak over I am really looking forward to a different race program and new challenges,” he says. “I feel I have missed so much doing the same thing over and over the last years. I believe I will be more fresh and will have so much more to give.”

The post The reinvention of Adam Hansen appeared first on CyclingTips.