The World’s Best Pound-For-Pound Boxer Is From Nebraska 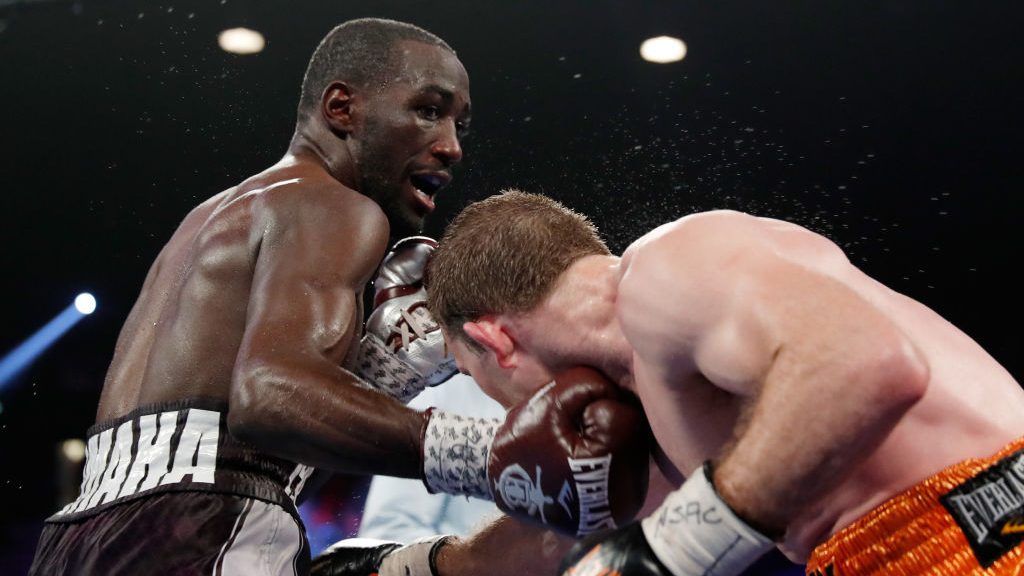 When Terence Crawford headlines Madison Square Garden on Saturday night, there’s a safe bet that the name of his hometown will appear along the waistband of his trunks. This alone isn’t terribly surprising: One of the strongest bonds between athlete and hometown is found in a ring.

What is peculiar is the metropolitan area that serves as the backdrop of and motivation for Crawford, one of boxing’s preeminent stars: Omaha. As in Nebraska.

And yet, Omaha raised the best pound-for-pound American fighter active today. And Omaha is where Crawford stayed, even as he understood that where he was would threaten to shrink the ceiling of his stardom.

“It was important for me to stay here because this is where I was born. This is where I grew up. This is where my struggles and my pain were,” Crawford told the Omaha World-Herald. “For me to pick up and just leave, it’s like me running away from my problems. … I want to bring boxing to life in Omaha.”

If boxing ever retires on the stool, one of the first chapters of its history will be dedicated to geography.

After Greg Haugen insulted Julio César Chávez’s countrymen and their financial ability to support the Mexican champion, officials erected a moat and barbed wire to protect the American in Azteca. Then Chávez soundly pummeled him in front of one of the largest live crowds in boxing history. Virginia Beach meant so much to the late Pernell Whitaker that he was married at its Pavillion … in a ring. After dropping George Foreman in the Rumble in the Jungle, Muhammad Ali, known to provide exclusive access to his hometown paper, proclaimed, “I’m recognized all over the world now, but my greatness came and started in Louisville.”5

Hometowns and nationalities have played central roles in many of the most memorable fights. Tom Molineaux vs. Tom Cribb. Joe Louis vs. Max Schmeling. Every Manny Pacquaio fight ever.

BoxRec.com, the industry standard in record keeping, lists every fighter and his or her hometown. As Rafe Bartholomew detailed in The Athletic earlier this year, that database consists of more than 650,000 current and former fighters.

Four of the current top 100 U.S. fighters claim Brooklyn as their place of birth. Philadelphia has eight. California, New York and Pennsylvania account for more than 30 percent of the top 500 U.S. fighters of all time.6

Nebraska sticks out quite a bit on a spreadsheet. Of the top 500 U.S. fighters all time, only four were born in Nebraska.7

States, districts and territories by number of all-time, top-500 American fighters born there

Best native boxer by points
No.
of boxers

Numbers don’t add to 500 because American citizens born outside the country and citizens for whom birthplace data was unavailable were excluded.

BoxRec considers Crawford the top-rated welterweight in the world — ahead of marquee names including Errol Spence Jr. (26-0-0) and Manny Pacquiao (62-7-2) — and the No. 49 fighter ever.8 Omaha’s first-ever world champion, and the first Nebraskan to win a world title since 1914, is already considered by some to be among the greatest to ever lace up a pair of gloves.

“We’ve never seen anyone like him,” says Tony Boone, who has perhaps spilled more ink than anyone over Crawford since he started covering him a decade and a half ago. “We probably never will, either.”

Nebraska is hardly Alaska when it comes to boxing history, but before Crawford’s rise, boxing held marginal value in a state where football has long been the chief attraction. But it wasn’t just the state’s reputation Crawford was up against.

“I’d say the Midwest as a whole is known for having tough fighters, but no one that’s really at that elite level of skill,” Boone contends. “These are typically guys who could go a few rounds with really solid fighters, but they weren’t world-class.”

Aside from Philadelphia, which boasts one of the richest prizefighting histories of any city in the world — stemming from the area’s popular bareknuckle bouts during colonial times — an area needs an elite fighter to spark a movement that can endure. Boxing was popular in the Philippines before Pacquaio became a household name, for example, but his unprecedented career gave way to a new generation of Filipino fighters to continue its tradition when he eventually retires.

Crawford grabbed his city’s attention with a June 2014 world title fight against Yuriorkis Gamboa. Crawford had recently returned from Glasgow, Scotland, where he had emerged victorious from a bout with WBO lightweight champion Ricky Burns (in the latter’s backyard). Gamboa, a former Olympic gold medalist and undefeated challenger, was no slouch. Nearly 11,000 fans turned out in Omaha.

After struggling with Gamboa’s speed in the early going, Crawford adjusted and knocked the Cuban down four times before ultimately winning by technical knockout in the ninth round of what was later named the fight of the year.

In the five years since, Crawford has unified the junior welterweight division,9 becoming the second man in the four-belt era to do so. He’s now a three-division world champion and among the greatest athletes Nebraska has ever produced. ESPN has named him Fighter of the Year twice; he also earned the honor from the Boxing Writers Association of America. As early as 2016, some were calling him the finest prizefighter alive, a sentiment echoed by Floyd Mayweather in 2017 and recently by Andre Ward.

WBC heavyweight champion Deontay Wilder arguably packs the deadliest punch in at least a quarter-century. WBO and WBA lightweight champion Vasyl Lomachenko has perhaps the best footwork and had the most rapid rise. But depending on your preferred pound-for-pound hierarchical aggregator,10 Crawford is perhaps the most well-rounded fighter on the planet.

His ability to make in-fight adjustments is unparalleled, Boone says. Crawford often spends the early rounds of a fight11 downloading information on his opponent. A read-and-react dance then gives way to one of the sport’s top finishers. He doesn’t simply win fights; he undresses his opponent with dizzying hand speed, crafty combinations and uncanny rhythm.

And that Crawford is a switch hitter makes him all the more difficult for an opponent to calibrate. He effortlessly toggles between orthodox and southpaw stances, capable of and proficient at establishing rhythm and inflicting pain from every window, every angle.

Crawford has won by stoppage in 74.3 percent of his professional bouts, including each of his last six and nine of his last 10. He has been in 13 world title fights and has never lost.

But his legacy will one day include not only his in-ring accomplishments, but also what he ultimately left behind for his community. There’s reason to believe that the rising value boxing holds in Omaha and Nebraska won’t evaporate when Crawford retires.

Crawford brought a boxing gym and recently a store to his hometown. He has pledged countless resources into North Omaha urban development. “This will spark something,” Boone says.

Crawford typically conducts training camp in Colorado Springs and has been joined by fighters from around the country in recent years. Some have even passed through Omaha.

“I think that shows there’s a chance that Omaha — yes, Omaha — could produce another world champ in the future,” Boone says.