Those Who Need It The Most 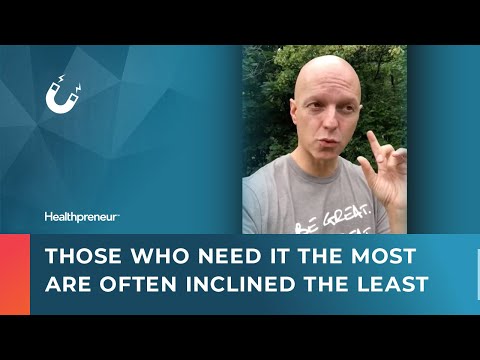 Those who need the most are the least inclined, and it can be frustrating as a health professional. You have this magic that can really help someone and they’ve raised their hand, they say, “Yeah, I want some help, I’ve got this issue, I want solved.” And you get to talking with them and they seem like a good fit, and then it gets to the point where maybe you mentioned your price or whatever, and they’re like, “You know what? Maybe this is not that big of a deal. I’ll kind of do things on my own for a while.”

Are You Ready To Do What It Takes

Can you relate to that? I know I can, and I think a lot of us can. It doesn’t really matter if you’re a health professional or any kind of business owner, this is the nature of reality and what I’ve recognized, and I’m sure you have as well, is that there’s a very big difference between people saying they want something, and being ready to do what it takes to get that thing.

So let me give you an example from my own life. As you can tell, I don’t have any hair. I lost my hair when I was 17 to an autoimmune condition. I was motivated out of my mind during that period of time to figure out what was going on and to grow my hair back.  I went on this eight year journey. Obviously there was peaks and troughs of, “Okay, I don’t care,” “I care,” “I don’t care,” whatever. When I was 24 I went back to school to study holistic nutrition, and that’s where everything started to come together.  I made some simple changes, i.e., alkalize my body, to improve my health and my hair grew back. It was amazing, eyebrows, the whole bit. I kept my head shaved because it was my claim to fame by that point.

But a couple of years ago I took my oldest son to the doctor, and while I was there I got a tetanus shot, and I don’t even know why. And within two weeks all my hair fell out again. So by this point I was like, you know what? It sucks.

If you’ve heard my story about the makeup and stuff, you understand what that was all about. But I’m at a point now where I have access to hundreds of health professionals who are experts in autoimmunity and all this kind of stuff. I’m like, technically I could lean into them to really solve this thing, this issue. But I need to be super honest with you. The motivation is just not there. It’s just not that big of a deal for me at this point in my life. Sure, I’d want my hair back. Maybe. Who cares? I don’t know. But for me what’s a bigger issue is feeling good.

So what I’m trying to say is that when people say they want something, I don’t even think they understand whether or not they really want it, because they’re not realistic about what is going to have to go into this endeavor. So whether it’s building a business or transforming their health … See, the thing is everyone, we’re all used to doing this, right? We’re all used to going in whatever direction we’re going in, and all of a sudden we’re going to work with a coach or an expert and they’re going to have us go from here to here. And that change creates fear. Fear of the process, of what do I have to give up? What do I have to sacrifice? What do I have to commit to that’s going to get me uncomfortable? Do I really want to do that?

So listen, we all want to help everyone, we all want to heal the world. Our company mission at Healthpreneur, is to heal a billion people on the planet by 2040. We believe we can do that by helping more professionals build better businesses. But the reality is that not everyone is ready to be helped. And that’s something I really struggled with for a long time. And if you have as well, listen, you’re not alone, right? We all are dealing with that in some way, shape, or form.

Don’t Let Yourself Become A Commodity

But I want to remind you of something. Never, ever, ever should you suffer because your potential clients are. You should never compromise your pricing or your willingness to help people or not help people based on the fact that whether or not people can afford you. So if you charge X amount of dollars, and some people say they can’t afford you, it doesn’t mean you drop your prices. It does not mean you do that, because as soon as you do that you become a commodity, you become the same as everyone else, and at the end of the day you don’t help the people you think you really want to help, okay? I promise you this: I promise you with every fiber of my being, if you think that lowering your prices is helping people, watch what happens to their results when they don’t do anything because they paid you a hundred bucks instead of a thousand.

So anyways, if you agree with me, I’d love to know your thoughts in the comments below. In the meantime, join us in the Facebook group. We’ve got a great tribe, 2,600 health entrepreneurs in there building some great stuff in their businesses.

If you want to be surrounded by like-minded individuals who get you and who get it, click the link below.

Jump on over, join us in there, and when you’re inside, say hi. See you soon.

The post Those Who Need It The Most appeared first on Healthpreneur.