To harness our best selves, “Temper your empathy, train your compassion, and avoid the news” 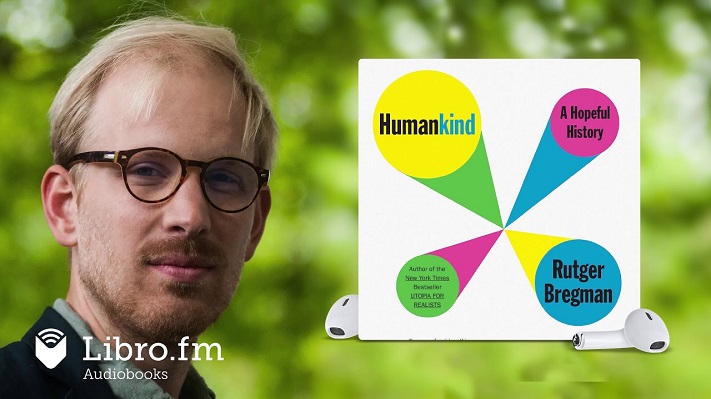 In the novel Lord of the Flies, a group of young boys are shipwrecked on an island and eventually turn savagely against each other. The book is a cautionary tale about humanity’s underlying cruelty and the need for civilization to tame our darker impulses—a message that resonates with many people today.

But that’s not what happened to a real-life group of shipwrecked kids in 1965. Unlike the fictional Lord of the Flies characters, they developed a game plan for survival that was cooperative, fun, and peaceful, resulting in lifelong friendships.

In other words, the boys didn’t turn into devils when left on their own—far from it!

Dutch historian Rutger Bregman recounts this story in his new book Humankind: A Hopeful History, arguing against the Lord of the Flies’s unreasonably dim picture of humanity. The key message in Bregman’s book is that humans are basically good, when left to their own devices.

That’s not to say there aren’t characters who will act badly, especially if encouraged (or manipulated) to do so or when under duress. But the vast majority of us are happy to work together cooperatively. This, he writes, is the only possible conclusion to make from the scientific and historical evidence.

And, he argues, it’s something we desperately need to understand if we want to work together toward creating a better society for all.

How we get it wrong

Some of the most famous evidence for our pessimistic view of human nature comes from the Stanford Prison Experiment done by Philip Zimbardo in the early 1970s. In this experiment, Zimbardo brought students into a lab and had them act out roles as prisoners and guards. Soon the experiment turned sour, as guards began acting too harshly toward prisoners, and it had to be shut down.

The experimenters concluded that people are sadistic underneath veneers of normalcy and can easily be manipulated to do harm. But Bregman points out that the results came about because the “guards” were encouraged from the start to be harsh toward “prisoners.” By enacting their roles, they thought they were contributing to science—a kind and helpful intent. Also, one student “prisoner” in the experiment, who supposedly “broke down” and had to be removed, confessed to faking his hysteria in order to get back to studying. The whole study and its conclusions were misrepresented.

“What’s fascinating is that most guards in the Stanford Prison Experiment remained hesitant to apply ‘tough tactics’ at all, even under mounting pressure,” writes Bregman. In fact, a later “prison experiment” mounted by the BBC, where guards were not told what to do, had very different results. The guards soon became reluctant to take on their authoritarian roles and became friendly with “prisoners” instead.

Actually, research suggests that people are quite unwilling to harm others—even in war situations—without strong coercion, which explains why leaving people to their own devices would produce different results.

Bregman takes readers through many experiments and events that seem to point to our flawed natures, and debunks them one by one. For example, we learn that the famous story about Kitty Genovese—a woman who was brutally raped and murdered in Queens, New York, while neighbors supposedly did nothing to help—is largely fiction, perpetuated by the New York Times coverage of her death. It turns out that the Times’s claim about 37 heartless bystanders was false, and people did come to her aid, including a neighbor who held her while waiting for an ambulance to arrive.

Still, this story of unconcerned bystanders is retold over and over as proof of human indifference and, like the Stanford Prison Experiment, graces many social psychology textbooks. Therein lies the problem.

Why does it matter?

The danger in continuing to repeat false conclusions from flawed research is that it feeds a narrative that doesn’t serve us. People hearing these findings start to believe that sadists lurk among us and they can’t trust others, when most of the time they can. It also supports the idea that only through strict social control from on high—dictatorships or police states, for example—can we stop our communities from devolving into chaos.

According to Bregman, it’s important to understand that our true nature is (mostly) good, because it can encourage us to create institutions with less hierarchical structures and less stifling leadership. And these ways of organizing ourselves can have better outcomes.

For example, he highlights the home nursing program Buurtzorg, created first in the Netherlands, in which nurses cut out the management and created a cooperative that has been cost-effective and provides better patient care. He mentions city governments in Brazil that enacted public budgeting processes—where citizens had more say in how city funds were spent—that resulted in more health care spending, fewer infant deaths, and more civic engagement. And, he writes, schools that are less punitive and more cooperative, and allow students to be more in charge of their education, help improve students’ intrinsic motivation—one of the most important factors for learning.

The “tragedy of the commons”—the idea that public resources shared by many (like air, water, and land) can be depleted if people use them in a self-interested way—has long been an influential idea in economics. But Bregman points to the work of Elinor Ostrom, the Nobel Prize–winning economist, who studied how people around the world actually manage the commons when left to their own devices. Her research paved the way for understanding that once certain elements are present, people act cooperatively and don’t require social control—a finding that resonates with many economists today.

This positive view of human nature can inform us about how police should handle crime prevention and prison reform, too, writes Bregman. Too often people believe that getting “tough on crime” and giving harsh prison sentences are what lead to crime reduction. But, Bregman argues, police departments that follow tough-on-crime tactics (like arresting people for minor violations) increase incarceration rates without reducing crime. Meanwhile, prisons that treat their prisoners humanely—by keeping sentences short and focusing on creating a more natural, community-based system inside the walls of the prison—prevent more crime and recidivism and are more cost-effective than those that don’t.

The book is full of other fascinating examples of places and programs being remade based on human goodness and trust. Bregman’s take-home message is that our better nature will win out, if we can only recognize its ubiquity.

That means recognizing the potential for goodness in everyone, even groups of people who look, think, or act differently from us whom we might be prejudiced against. One way to do so, research suggests, is to work on building positive contact across groups—like friendships and cooperative work relationships—that will increase our trust for others.

Bregman lists several other tips at the end of his book that people can use to see the goodness in humanity—things like “When in doubt, trust first,” “Temper your empathy, train your compassion,” and “Avoid the news.” If we take the view that we are born to be good, we can make a society that is fairer and freer for all, he says. That doesn’t take optimism; it just takes paying attention to science and experience.

“To believe that people are hardwired to be kind isn’t sentimental or naïve. On the contrary, it’s courageous and realistic to believe in peace and forgiveness,” he writes. — Jill Suttie, Psy.D., is Greater Good‘s  book review editor and a frequent contributor to the magazine. Based at UC-Berkeley, Greater Good highlights ground breaking scientific research into the roots of compassion and altruism. Copyright Greater Good.

New book Humankind: A Hopeful History
Study finds a key ingredient in mindfulness training: Acceptance (not acquiescence)
Four tips to practice good mental hygiene during the coronavirus outbreak
New study reinforces the importance of walking through forests for mental and general health
Six tips to build resilience and prevent brain-damaging stress
Three ways to protect your mental health during –and after– COVID-19