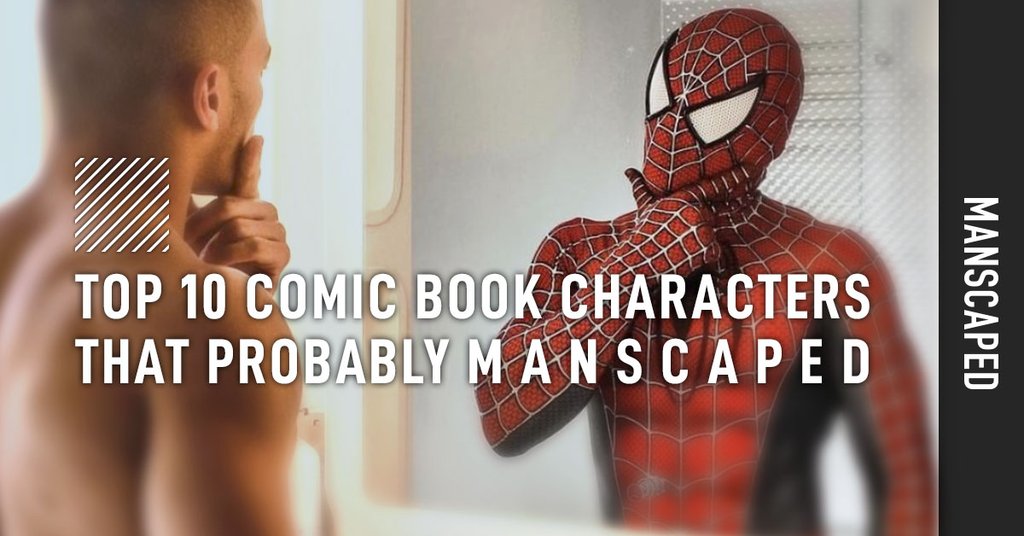 It’s important to understand that the majority of men are doing at least a little manscaping these days. There are still pockets of society that have yet to embrace this truth, and that can lead to awkward conversations and a little friction. If you really want to know how prevalent manscaping is, it has even penetrated the world of fictional heroes. Since comic books and comic book movies are the pinnacle of pop culture right now, we figured we’d take a few minutes to discuss some of the top manscapers in these worlds.

If you haven’t read any of his comics, you might recognize Lucifer from his hit TV show. Lucifer ran on Fox and was later picked up by Netflix. It’s the same character created by DC comics roughly 30 years ago.

If Lucifer doesn’t manscape, it’s only because his divine anatomy naturally grows to perfection. Otherwise, you can bet that a pristine trim is part of his daily routine. Speaking of comic book playboys, who could leave Tony Stark off of this list? When you’re a billionaire genius with a new woman in your bed every night, you learn a few tricks to maximize your game. Besides helping him between the sheets, Iron Man probably also manscapes to make flying around in a metal suit a little more comfortable.

We’d love to imagine that Tony relies on Manscaped products, but considering his engineering genius, he probably developed some advanced laser treatment that is the stuff of our dreams. It might even be a hidden function inside one of the Iron Man suits.

Billionaire genius playboys are starting to become a trend on this list. Much like Iron Man, Batman gets through life with deep pockets and a big brain. He’s also been good with the ladies throughout his career. Sometimes, he has a penchant for the bad girls, so you know they don’t let him get away with laziness in the sack.

While we imagine Batman probably doesn’t need to design his own manscaping gear, he probably spends a little extra money to get it shaped like a bat. We’re not here to judge anyone’s fetishes. We finally got away from the pretty boys. While Deadpool is known for his smart mouth, you can trust that the man who tamed the goddess of death herself takes care of business below the belt. There’s simply no way he could keep her satisfied without pulling out all of the stops.

If the comic character doesn’t typically manscape, you know that the Ryan Reynolds incarnation definitely does. You can also trust him to make inappropriate jokes about it — probably at the worst possible time.

In the shadow of the MCU, a lot of people forget about Johnny Storm. This is the man who erupts into fire and flies around doing hero things. Johnny is another extremely sexy comic male, and he’s never had trouble finding female companionship.

He’s also a character we’re quite sure manscapes, although he might get to cheat in the way he does it. While we’re not exactly sure how the human fire thing works, we’re pretty sure he can burn off all of his body hair if he wants to. It’s a limited look, but it’s hard to blame the guy for doing things the easy way. It might also help with flight aerodynamics.

You might remember the blue guy from Watchmen. You definitely remember his swinging blue dick. That’s now an important part of cinematic history. You might also remember that there’s no sign of body hair anywhere on this character.

Here’s the thing. Doctor Manhattan has shown a willingness to grow extra appendages just to satisfy a lover. Do you really think he’d be shy about a little male grooming? He’s also another character who gets to cheat with superpowers. His near omnipotence should make maintenance pretty easy.

If you watched his movie, you might have noticed that T’Challa has a smooth chest. We’re guessing that it isn’t a natural result of his super panther powers. Whether he grooms for social or athletic reasons is hard to guess. Most MMA fighters keep it clean, so that definitely could be part of his motivation.

Regardless, you can bet that T’Challa makes the most of living in the advanced society of Wakanda. We often daydream about what kind of trimmers and shavers could be made with vibranium and all of the amazing technology at T’Challa’s disposal.

If you aren’t familiar with Nightwing, his alter ego is Dick Grayson. He was the original Robin. After he and Batman went their separate ways, Nightwing established himself as the sexiest hero in the DC universe. He might be the sexiest character in all of comics.

Nightwing is another brawler and scrapper, and you can trust that manscaping is a performance enhancer for him. The idea of tugging body hair every time he does a triple backflip into a drop kick just makes us wince. Here’s the thing with The Flash. This guy is stupidly fast. He’s so fast that he regularly breaks reality. He’s running at speeds that don’t actually make sense, and he looks good while doing it. As much as we can imagine Nightwing and other characters manscaping in order to get a little more performance out of their fighting, it pales in comparison to what is happening with The Flash.

This guy is running so fast that having hair between his legs would be a nightmare. Sure, his superpowers probably have some magic defense against lighting his pubes on fire or whatever, but seriously, he’s doing athletic feats that make the thought of pubic hair unbearable. You know he manscapes.

Our last character of the day doesn’t probably manscape. He definitely manscapes. In fact, it’s an important part of several of his character arcs. When you’re faced with blue body hair covering every inch of you, you’re going to try to find a way to cope.

While Beast eventually comes to terms with his looks in a lot of his stories, there are plenty of arcs where he devotes his genius to manscaping. He comes up with advanced formulas and technologies all for the sake of looking a little sexier, and we don’t blame him one bit.

Some of your favorite fictional legends clearly manscape. They often get to use powers and technology beyond our wildest dreams. In the real world, the best tools you can get for body grooming come in The Perfect Package 2.0. Let’s go through them really quickly. Our new and improved trimmer is made for easy and excellent grooming. It’s made to cut hair quickly, painlessly and with precise control. We haven’t made one shaped like a bat yet, but if a crazy vigilante beats up enough criminals under a bat motif, we’ll look into it.

Our specially designed manscaping razor actually might compete with comic book technology. It derives power from simplicity. The two-edge safety razor is designed to make shaving around your balls as safe as possible. Using anything else is just risky.

Manscaping is about more than just cutting hair. You have to maintain your skin too. Crop Cleanser is something Beast would probably love. It’s Active pH Control makes it an amazing body soap for promoting healthy skin and hair.

This is a product that the Flash would use above all else. It’s ball deodorant. It’s great for keeping you fresh and smelling great, but it also reduces friction between the legs and keeps your balls from sticking. Any hero would want it, but running at impossible speeds would pretty much require it.

The last item in the Perfect Package 2.0 is the spray toner. It has a formula that helps maintain healthy skin and hair, and it serves as a little pick me up whenever you need one.

If you want to manscape like a comic book character, then everything you need is available at Manscaped.com. We make the latest and most advanced tools for the job, and we supplement them with vast stores of knowledge. We have guides on style, technique, health and everything else you need to know to manscape at your best.