Toyo Tires Previews Six SEMA Builds Including Models Based On The Supra, Mustang And Bronco 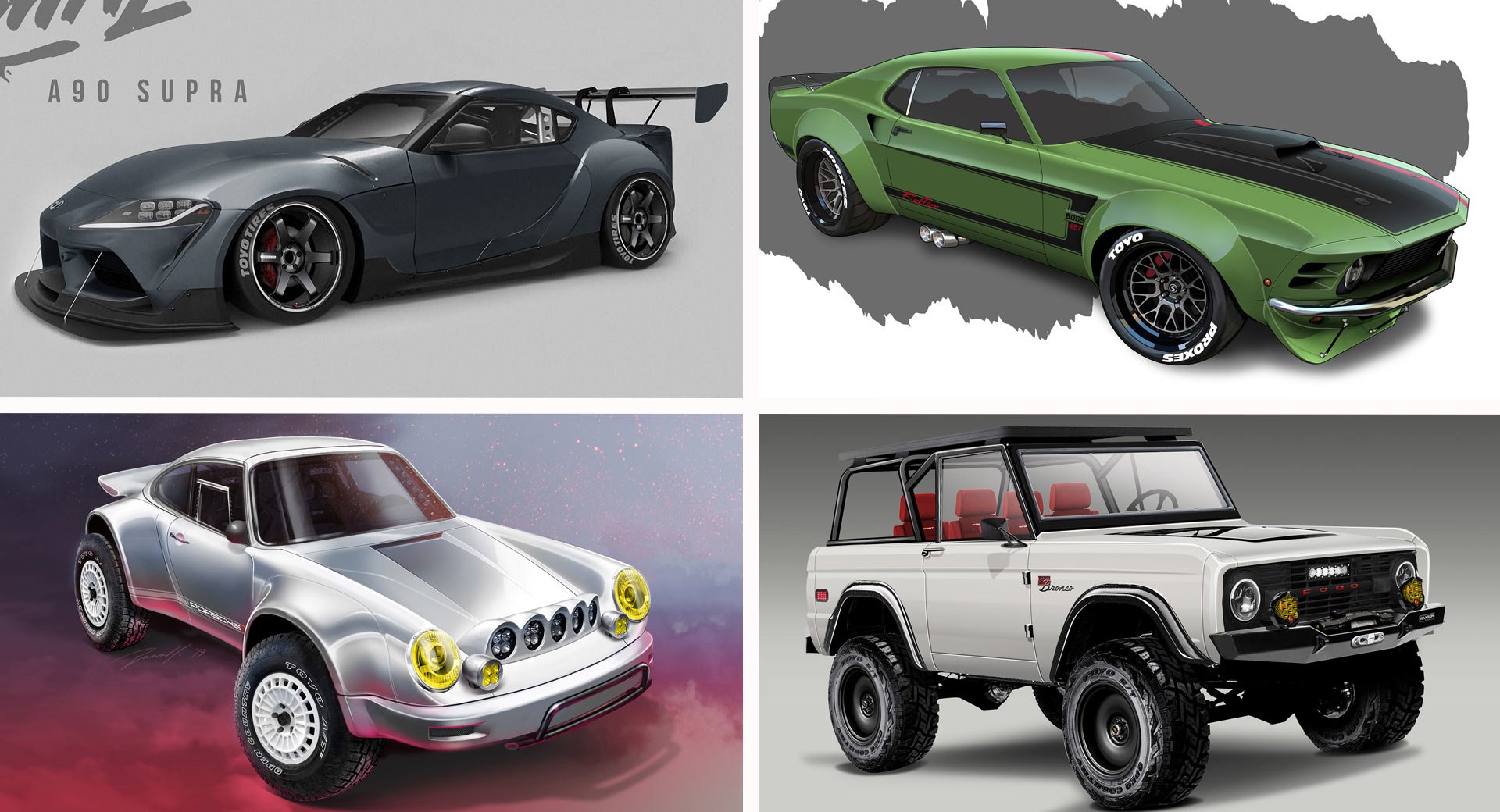 The SEMA Show is right around the corner and Toyo Tires is previewing a handful of models which will be on display at this year’s event.

First up is the Baja 911 which was created by Russell Built Fabrication in Sun Valley, California. Since founder TJ Russell was formerly the lead fabricator for Singer Vehicle Design, he naturally decided to base the build around a Porsche 911 – in this case a 1991 Carrera 4 Cabriolet.

As the name suggests, it’s a rally-inspired off-roader with a chromoly race cage and composite body panels that “keep the aesthetic DNA of a 911.” The latter components aren’t just for looks as they help to enable the car to weigh 400 lbs (181 kg) less than the donor vehicle. On the off-road side of things, the 911 has been equipped with a unique suspension that features billet aluminum spindles and a-arms. The model also has chromoly trailing arms and this helps the vehicle to have 12 inches (305 mm) of wheel travel.

Other highlights include a purpose-built 3.8-liter engine that produces 100 hp (75 kW / 101 PS) more than stock. The model has also been equipped with fifteen52 wheels that are wrapped in 30-inch Toyo Open Country A/T II tires.

Unlike many SEMA builds, the Baja 911 is slated to go into “low-volume customer-tailored production” early next year. Next up is a custom 1970 Ford Mustang Fastback. Created by Chris Ashton, the model has a “dechromed and smoothed body” which has been equipped with an assortment of hand-fabricated components including fenders, spoilers, scoops and vents. The model also has Porsche Olive Green paint and 18- / 19-inch wheels wrapped in Toyo Proxes R888R tires.

Despite being based on a Ford, the Mustang has a Chevy heart as power is provided by a LS3 engine that produces 625 hp (466 kW / 634 PS). Other highlights include a roll cage, DSC Sport TracTive coilover shocks and a Watts-link floating rear axle.

On the exotic side, there’s a 1999 Ferrari Berlinetta by Button Built. It features a motorsport-inspired exterior with a carbon fiber splitter, a rear wing and a diffuser. The model also has carbon fiber mirrors and an Azzuro la Plata paint job which first appeared in 1967 on a 275GTB Le Mans car.

The racing theme continues in the cabin as the model has a six-point roll cage and carbon fiber seats with six-point harnesses. Drivers will also find a new digital display.

Motivation comes from a 3.5-liter V8 engine that has been equipped with twin turbochargers. The model also has a custom tune and CSF intercooler cores and radiators. Thanks to these upgrades, the car develops 600 hp (447 kW / 608 PS) at the rear wheels. There will be an assortment of Supras at SEMA this year including one developed by Daniel Song and Jonny Grunwald (TRMNL). It features a Pandem widebody kit, a massive rear wing and 19-inch Rays wheels wrapped in Toyo Proxes R888R DOT competition tires.

Inside, drivers will find Recaro Pro Racer RMS seats with Takata Race harnesses. The model also has a roll cage and a rear brace.

On the performance front, the car’s BMW-sourced engine has been equipped with a Pure700 turbo upgrade as well as an SSR Performance downpipe, a titanium exhaust, a custom tune and a carbon fiber intake. Thanks to all these changes, the model develops 672 hp (501 kW / 681 PS) and 625 lb-ft (846 Nm) of torque. If the Supra isn’t fast and furious enough for your liking, perhaps this Lancer Evo will do the trick. It was created by Rowie Landicho and Dennis Aquino, and is based on a JDM EVO from 1998.

It features a Varis ASSO widebody kit and a 13-point roll cage with titanium door bars. Other highlights include Recaro bucket seats and “several hand-fabricated details.” Last but not least, there’s an SUV in the form of a modified Bronco. It sports a PPG Porsche Chalk paint job and 18-inch wheels wrapped in 35-inch Toyo Open Country R/T tires. The model also has a custom interior with red leather and suede upholstery.

Besides the styling changes, the Bronco has a custom coilover suspension and a Coyote engine. The latter is paired to a six-speed transmission and an Atlas transfer case.