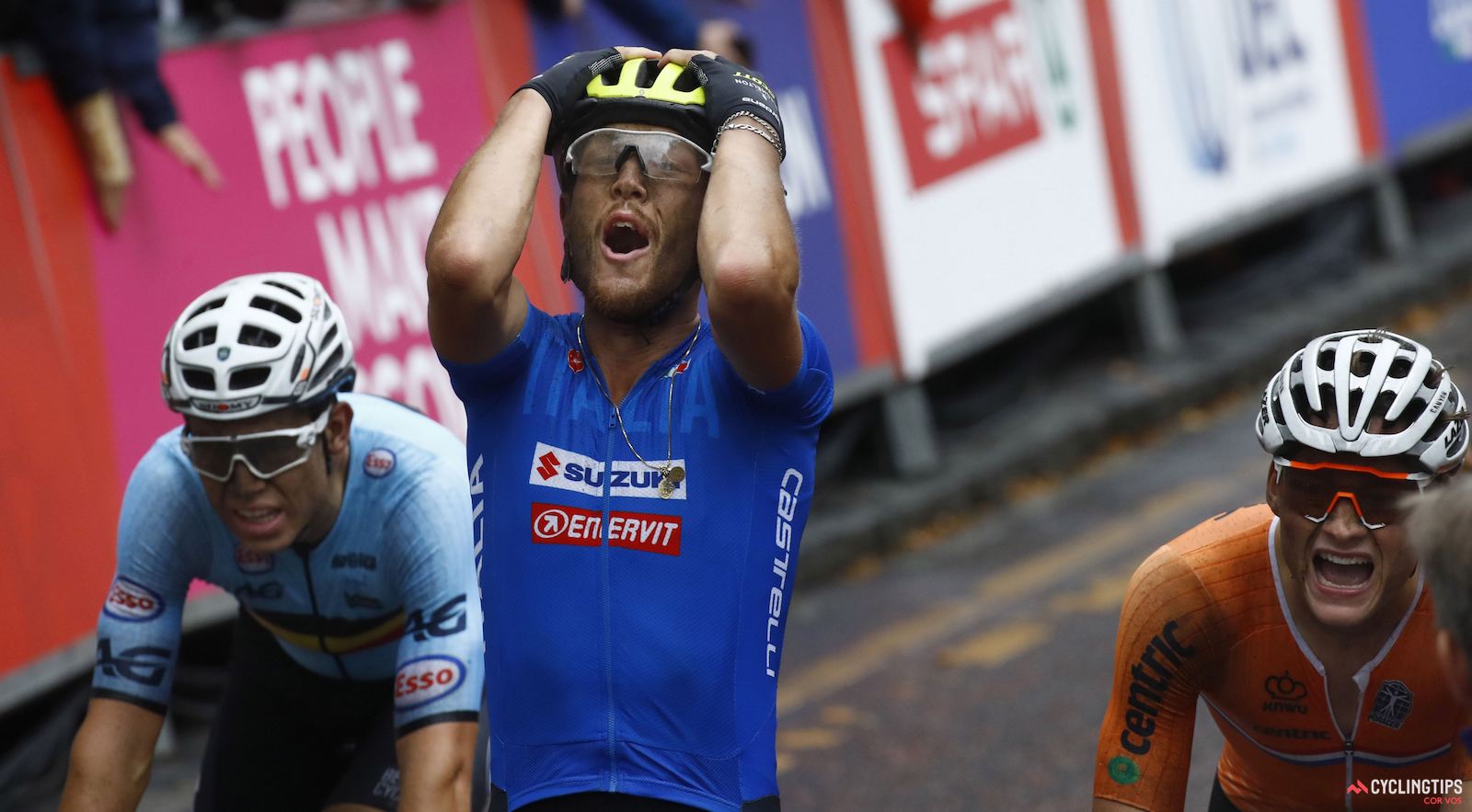 In an interesting twist, the European road race championships ended with two cyclocross stars fighting for the title. The conditions in Glasgow certainly felt like cyclocross weather, as rain pelted the riders for nearly the entire race. Also, Jan Ullrich left the psychiatric hospital he was admitted to on Friday. Those stories and more in today’s Daily News Digest

Peter Sagan is still recovering from the injuries he sustained when he crashed on a descent during stage 17 of the Tour de France. He pulled out of the European championship road race on Sunday after 150 kilometres.

I tried hard, I gave my best at the @UEC_cycling European Championship in @Glasgow2018 but I'm still feeling pain in my back and hip. I had to stop racing after 150km and I need some more time to fully recover from my @LeTour crash. Thanks, everybody! https://t.co/nsH3VxuHxL

For a moment, it appeared that the men’s European road race champion would indeed be a rider that has worn the rainbow bands as cyclocross world champion. Three-time world cyclocross champion Wout van Aert (Belgium) and former cyclocross world champion Mathieu van der Poel (Netherlands) came to the line with the leaders after nearly six hours in the rain in Glasgow. However, they couldn’t match the finishing speed of Italy’s Matteo Trentin.

“It’s incredible, really incredible to have won after everything I’ve been through recently,” Trentin said. “I want to thank everyone who was there for me. This is a great day.”

Trentin has struggled to find form his form this year after a 2017 season that saw him victorious on seven occasions, including four wins at the Vuelta a Espana.

Though first entering the limelight as cyclocross stars, van Aert and van der Poel have definitely shown their prowess on the road this season. Van der Poel won the Dutch road championships in June and van Aert competed in the spring classics where he finished in the top 15 in both the Tour of Flanders and Paris-Roubaix.

Sunday’s race was one of the last times we will see van Aert and van der Poel race on the road with the cyclocross season starting in just a few weeks. Both riders are expected to line up at the first cyclocross world cup of the season in Waterloo, Wisconsin on September 23.

Jan Ullrich left the psychiatric hospital in Germany where he was hospitalized on Friday after being arrested for assaulting an escort at a luxury hotel in Frankfurt, according to Gazzetta dello Sport. It was Ullrich’s second arrest in a week and it is understood that Ullrich will continue treatment elsewhere.

Ullrich was released on bail on Friday, but, according to the DPA news agency, suffered a panic attack afterwards. “Jan Ullrich was admitted to a psychiatric hospital on Friday night where his state of health is being assessed by specialists,” a Frankfurt police spokesperson told AFP on Saturday.

After the 1997 Tour winner trespassed on the property of German actor and film director Til Schweiger on Friday, August 3, he was arrested. Following his release, Ullrich said that his marriage had broken down and that he had not seen his children since Christmas. He said that this put him ‘into the deepest despair,’ that he had been abusing drink and drugs, and was awaiting a place on a rehabilitation programme.

Ullrich travelled back to Germany to undertake rehab, but then became embroiled in the latest controversy. He had recently said that going into rehab was a condition for him to be allowed to see his children again.

Dimension Data has bolstered its grand tour and one-day Classics’ squads with the signing of Roman Kreuzinger from Mitchelton-Scott. The Czech has signed a two year-deal with the South African-based team beginning next season.

“Joining Team Dimension Data provides a new motivation for me, a fresh start in some ways. Wherever I’ve ridden it’s been with success and this challenge is absolutely no different,” Kreuziger said in a team release. “I’ve had a really good year so far, but I still have my big goal for the year to come, the World Championships in Innsbruck.

Roman Kreuziger (Mitchelton-Scott) couldn’t hide his disappointment on the podium at the Amstel Gold Race after Michael Valgren (Astana) beat him in the final sprint. Photo: Cor Vos

Kreuziger, 32, had a solid run during the Ardennes Classics this past spring where he finished in the top 10 at each of Amstel Gold Race, La Flèche Wallonne, and Liège-Bastogne-Liège. His best result was second at Amstel, a race he won in 2013. He also rode the Giro d’Italia in support of Simon Yates this year and has finished in the top 10 of a grand tour on five occasions.

20-year-old Ivan Sosa (Androni Giocattoli-Sidermec) proved strongest on the Hors catégorie climb to the finish in Lagunas de Neila, as he won the fifth and final stage of the 2018 Vuelta a Burgos. The victory also propelled him to the top of the final general classification. Previous race leader and winner of stage three, Miguel Angel Lopez (Astana), finished second on the stage. Lopez conceded enough time to lose the leader’s jersey to Sosa. Sergio Pardilla (Caja Rural) rounded out the stage podium.

The final 11-kilometre climb to the finish saw many fireworks with Pardilla putting in a blistering attack out of the select GC contenders with just two kilometres to go. Sosa, Lopez, David de la Cruz (Team Sky), and Igor Anton (Dimension Data) led the chase behind Pardilla.

Sosa made his winning attack inside the final kilometre and passed Pardilla with less than 400 metres to go to take the stage win. The Colombian claimed the overall title by 17 seconds over Lopez with de la Cruz (Sky) in third at 53 seconds. Sosa took home a handful of jerseys, as he also won the mountain jersey and was the race’s best young rider.

The first national champions of the 2018/19 cyclocross season were crowned over the weekend in Australia with Flanders-health.com.au teammates April McDonough and Chris Jongewaard sweeping up the green and gold stripes.

The women’s race around the vineyards of Sam Miranda took shape early. It was a dramatic opening lap, as pre-race favourite Natalie Redmond (Cannondale) rolled a tubular tyre early and then a crash split the group. McDonough emerged from chaos in the lead and had the legs to keep stretching her gap throughout the race. Naomi Williams (Team Willy-Locke) put in a hard chase and came home second. While former under-23 Australian champion Stacey Riedel (MAAP-ENVE) finished third.

In the men’s race, it was the usual suspects out the front with the trio of Jongewaard, Garry Millburn (MAAP-ENVE), and Chris Aitken (Focus-Attaquer) quickly gaping the rest of the field. The South Australian Jongewaard again proved too strong, taking his fourth Australian Cyclocross National Championships ahead of the former under-23 champion Aitken. Millburn came third.

Nibali back riding outside after surgery on vertebra

Over the weekend, Vincenzo Nibali posted a video on Instgram of him riding outside. Nibali fell on Alpe d’Huez on July 20th and fractured his tenth thoracic vertebra. He had percutaneous vertebroplasty surgery last week, where acrylic bone cement was injected into his fractured vertebra to try to help the healing process. The Italian has the goal of starting the Vuelta a Espana on August 25th.

Get an inside look at the UCI Women’s WorldTour PostNord Vårgårda West Sweden TTT that was ridden in rainy conditions. Boels-Dolmans proved to be the strongest, as the Dutch squad took its third consecutive victory in the event. Team Sunweb finished second and Cervelo-Bigla rounded out the podium.