Trey Edward Schults on How Krisha Captures the Terror of Thanksgiving 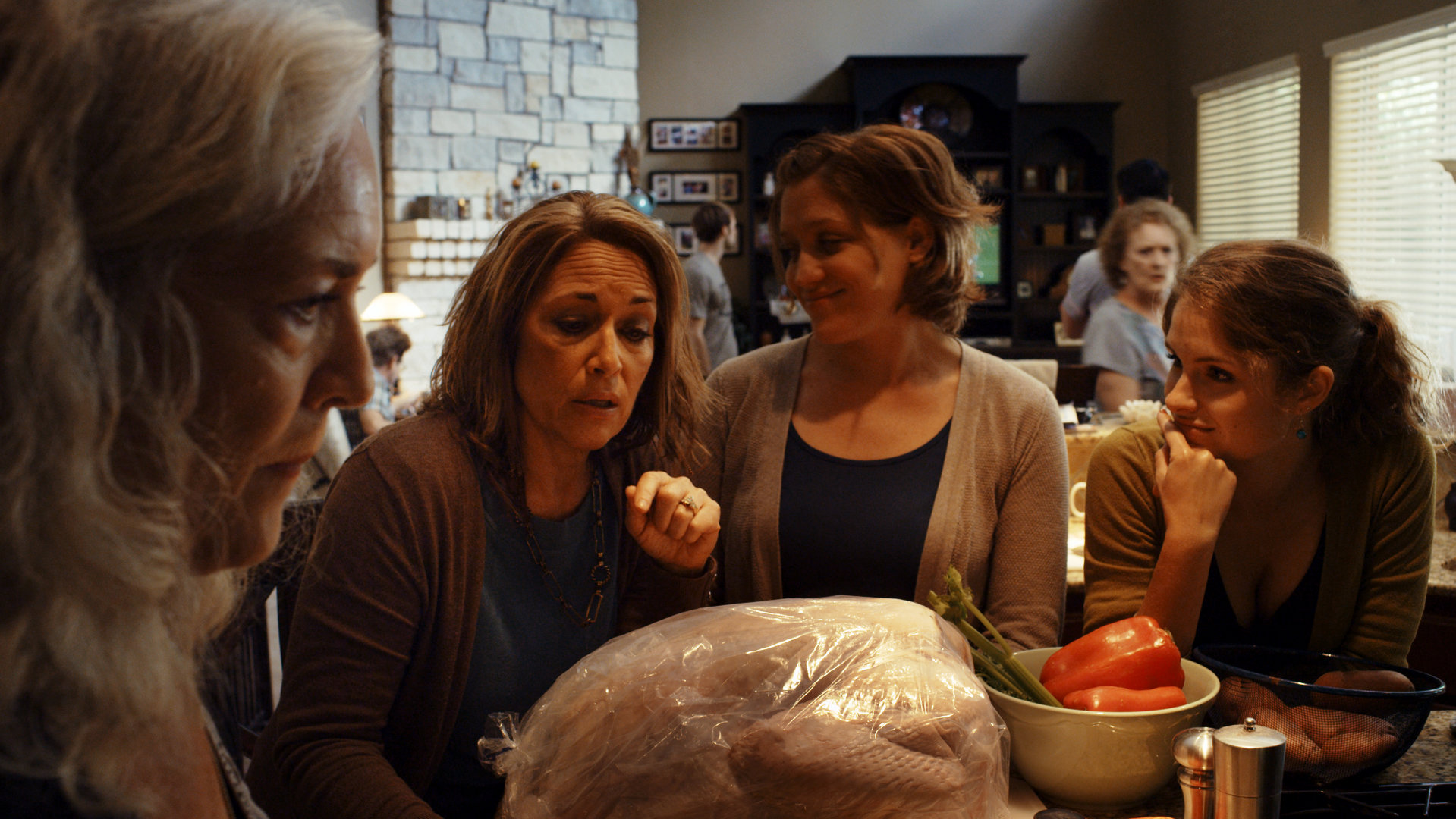 At its best, Thanksgiving is supposed to be one of the most joyous times of the year, a moment for extended families to reunite for one glorious long weekend of food and fellowship. But let’s get real: Whether you’re hosting or traveling, Thanksgiving can end up being an anxiety-inducing mess — a crowded gauntlet of complicated food, uncontrollable pets, and nerve-wracking political arguments with distant relatives.

The American Psychological Association has found that “holiday stress” is a real, measurable phenomenon. More than half of respondents to an APA study reported feeling fatigue, stress, and irritability “often or sometimes” during the holidays. Psychologist and family counselor Dr. Marie Hartwell-Walker of PsychCentral notes that “family holidays bring out the family dynamics – the good, the bad, and the ugly.”

Is it any wonder, then, that Trey Edward Shults‘ 2015 debut Krisha feels so very relatable (and horrifying) to anyone who’s had to endure an uncomfortable Thanksgiving?

I’d wager a good many of us have felt that squeeze at one moment or another on Turkey Day: the anxiety of cooking the perfect Thanksgiving turkey, the steep airfare cutting into your savings, the irritable uncle who can’t resist making cracks about politics. Thanksgiving is the time where you’re forced to be around all the relatives you’ve blocked on Facebook, and now the Minion memes are coming from inside the house.

For eponymous protagonist Krisha (Krisha Fairchild), that Thanksgiving stress manifests itself in heartbreakingly visceral ways. Shults’ dizzying, impressionistic style doesn’t offer many explicit clues as to her position in the family until the end, but what we know is this: Krisha’s the black sheep of the clan, someone who’s burned innumerable bridges through a lifetime of drugs, alcohol, and bad decision-making. Everyone’s all smiles when she arrives, but you can see the careful, measured caution in their greetings. Everyone’s trying very, very hard not to bring up the unspeakable schisms in their relationship.

There’s a lot riding on this Thanksgiving for Krisha — one chance to mend decades of deep familial wounds. She’s even volunteered to cook the turkey! But over the course of the next 83 minutes, her tenuous grasp on sobriety (and, by extension, the family’s sense of detente) begins to slip, and tensions boil over like an overcooked gravy.

Of course, as universal a story as Krisha is for many Americans, it’s got a personal connection for Shults himself. The film’s very much a family affair: Fairchild is Shults’ real-life aunt, and both his mother Robyn and grandmother Billie play versions of themselves. Krisha’s struggles with addiction mirror his own cousin’s relapse at a family reunion. The entire film is shot in the house where his parents grew up, and Shults’ wandering camerawork perfectly captures the kind of nagging claustrophobia that happens when a large group of family members stalk around a big house, catching up or viewing other family conflicts from a distance. 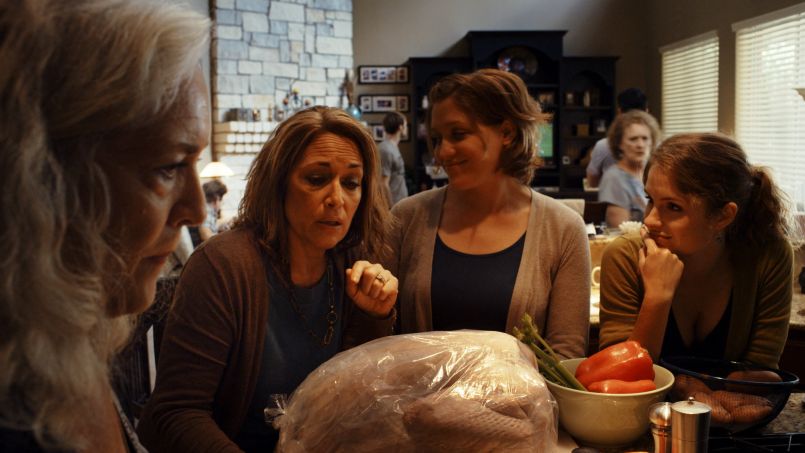 According to Shults, who we interviewed for this piece, Thanksgiving was the perfect setting to reconstruct this kind of family tension: “There’s blood in the history of Thanksgiving,” he says, and this re-staging of his own family troubles was an attempt to “pay tribute to these lost souls in our family.” And Krisha is the ultimate lost soul, a woman desperate to move past a lifetime of regrets through the performance of a perfect Thanksgiving.

Given the family she’s working with, Krisha has her work cut out for her, the family environment capturing the cavalcade of personalities familiar to many an American Thanksgiving reunion. Mothers and aunts fuss over the home and laundry, college-aged cousins stomp around the house arm-wrestling and shouting at the game on TV, and workaholic stepdad Dr. Becker (Chris Doubek) paces the house answering phone calls and searching for lost patient files on his computer. (The latter was inspired roughly by Shults’ own stepdad, who, like his on-screen counterpart, “also loves karate.”)

Then there are the flies in the ointment, the shit-stirrers, the irascible uncles and step-relatives who refuse to obey the tacit social contract of a tense family holiday. In Krisha, that’s Doyle (Bill Wise), the sardonic provocateur who sees right through Krisha’s pseudo-spiritual doublespeak and challenges her on just how reformed she really is. “You are a leaver,” he tells her. “You are heartbreak incarnate.” “Doyle and Krisha are the closest to knowing each other’s experiences,” says Shults; he and Wise worked together closely to build the character through improvisation, creating that perfect holiday agent provocateur who will poke and prod at old wounds until they open back up.

Krisha also touches on another reason we’re compelled to return home for Thanksgiving, even amidst touchy family relations: the older relative for whom this might be their last holiday. Shults’ real-life grandmother Billie, here a wide-eyed observer viewing the proceedings through the fog of dementia, serves as both a unifier for the family’s varying generations and a dark reflection of Krisha’s mistakes. Part of Shults’ motivation for putting her in the film was to have a digital record of his grandma. “She had dementia, so she didn’t know what was going on,” he admits, “but she’s a social butterfly.” That made her more than happy to play along, and the results are immediate and heartbreaking as the family dynamic softens to make time for someone they might be seeing for the last time. And, of course, when she remembers everyone in the family, except Krisha, that just adds more fuel to her sense of alienation.

But no Thanksgiving dinner is complete without the turkey, and Shults doesn’t miss a chance to use the bird as a potent visual metaphor for the pressure cooker Krisha finds herself in. The task of preparing the turkey is a messy one, Shults’ camera lingering on the grotesqueries of chopped vegetables, the schlick of giblets and the cacophonous whir of blenders. Prominent in the frame is Krisha’s missing finger, an injury that goes unexplained but sits uncomfortably close to her carving knife, the sound design amplifying every hollow chop-chop-chop of the knife. Her finger’s covered in a bandage, and in one stomach-turning moment, Krisha actually loses the bandage inside the turkey cavity, while another family member looks on in disgust. “It’s a perfect visual manifestation of her trying to integrate back into this family,” says Shults. 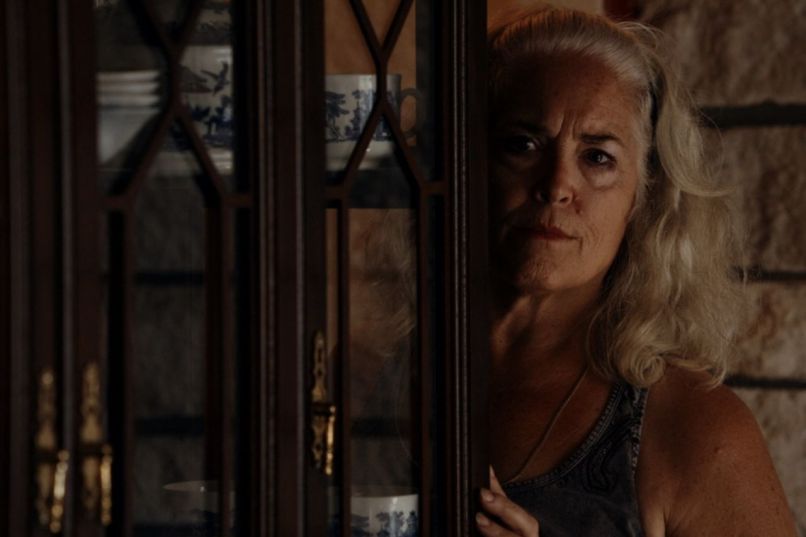 Every little fuckup is another log on the pile of anxiety she feels as the day’s tension builds. And, in classic hot-mess fashion, Krisha’s mid-day relapse leads to her dropping the perfectly-roasted, glazed turkey in a wine-drunk haze, Shults filming the moment with all the slow-motion import of a bomb being defused. Just as the turkey splits open on the white tiled kitchen floor, drowning in a sea of golden gravy, so too is all of Krisha’s hard-fought work to reconcile with her family tossed to the ground.

Whether you’ve been the black sheep of the family, or known that stomach-churning discomfort of being around that person in your family, Krisha feels nauseatingly familiar. Trapping us inside the psychology of a person shut out of their own family tree, and the Sisyphean effort to address their own demons, Shults finds that blissful tension inherent to any Thanksgiving reunion. We’ve all felt it, whether around that alcoholic cousin or Fox News-entrenched grandpa; tryptophan and red wine quickly erode veiled niceties into shouting matches and passive-aggressive snipes about personal slights from ten years ago.

Thanksgiving is a largely barren cinematic playing field. Apart from the odd seasonal horror movie or family comedy, there are few opportunities to really plumb the depths of family dysfunction engendered by the holiday. The political polarization of the last four years certainly hasn’t helped. With impeachment hearings and trade wars and quid pro quos, this might be the tensest Thanksgiving yet. For all its subjective style and domestic detail about its real-world subjects, Krisha manages to capture a deeply relatable holiday terror. “The more specific you make something, the more universal it is,” Shults remarks. Too true. Even as these issues feel individual to the filmmaker’s own clan, they reflect deeply on the stress, anxiety, and melancholy of the Thanksgiving experience.