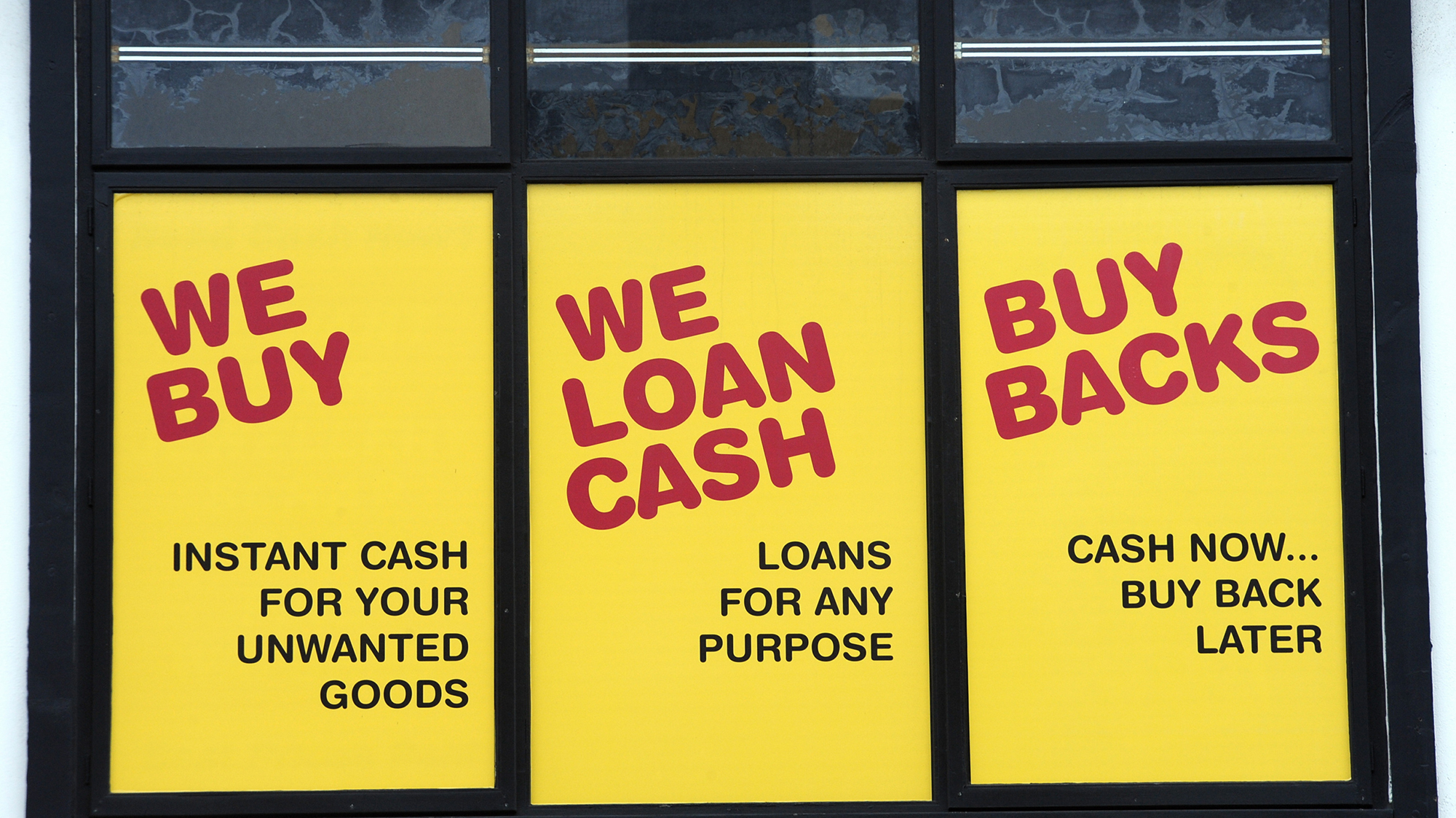 When South Dakotans voted 3–to–1 to ban payday loans, they must have hoped it would stick. Interest on the predatory cash advances averaged an eye-popping 652 percent—borrow a dollar, owe $6.50—until the state axed them in 2016, capping rates at a fraction of that in a decisive referendum.

Donald Trump’s finance czars had another idea. In November, the Federal Deposit Insurance Corporation (along with the even more obscure Office of the Comptroller of the Currency) floated a permanent loophole for payday lenders that would essentially make the South Dakota law, and many others, moot—they could launder their loans through out-of-state banks, which aren’t subject to state caps on interest. Payday lenders arrange the loans, the banks issue them, and the payday lenders buy them back.

Every year, borrowers shell out close to $10 billion in fees on $90 billion in high-priced, short-term loans, numbers that only grew under the Trump administration. The Community Financial Services Association of America estimates that the US has nearly 19,000 payday lenders—so called because you’re supposedly borrowing against your next paycheck—with many run out of pawnshops or other poverty-industry staples. “Even when the loan is repeatedly re-borrowed,” the CFPB wrote in 2017, many borrowers wind up in default and getting chased by a debt collector or having their car or truck seized by their lender.” Payday loans “trap consumers in a lifetime of debt,” top Senate Banking Committee Democrat Sherrod Brown told A Plus in 2015.

When South Dakota’s anti-payday rule took effect, the legal loan sharks collapsed. Lenders, which spent more than $1 million fighting the law, shut down en masse. But it was a success story for South Dakotans like Maxine Broken Nose, whose car was repossessed by a lender at the Black Hills Powwow after she paid off a $243.60 balance one day late. Her story and others—Broken Nose’s family watched repo men come for “about 30” cars at the powwow—are featured in a documentary from the Center for Responsible Lending.

At the time, South Dakota was the 15th jurisdiction to cap interest rates, joining a red-and-blue mix of states where many workers can’t even live paycheck-to-paycheck. Georgia considers payday loans racketeering. Arkansas limits interest to 17 percent. West Virginia never allowed them in the first place. Many states ban usury, the practice of gouging consumers on debt when they have nowhere better to turn. But those laws were set up to stop an under-regulated spiderweb of local, storefront cash advance shops—they don’t keep payday lenders from teaming up with big out-of-state banks, and they can’t go toe-to-toe with hostile federal agencies.

The Trump administration, on the other hand, has been cozying up to payday lenders for years. In 2018, Trump picked banking-industry lawyer Jelena McWilliams to run the FDIC, which is tasked with “supervising financial institutions for safety and soundness and consumer protection.” In a 2018 Real News Network interview, ex-regulator and economics professor Bill Black said McWilliams was “fully invested with the Trump agenda” and would “slaughter” financial regulations. While McWilliams’ Obama-era predecessors led a tough crackdown on quick cash loans, the Wall Street Journal reported in September that McWilliams encouraged banks to resume making them. And last February, the Consumer Financial Protection Bureau—another consumer-protection agency turned extension of the banking lobby—rolled back Obama-era rules that told lenders to “assess a borrower’s ability to pay back debt before making loans to low-income customers”:

The decision to weaken the payday lending rule was first proposed by acting director Mick Mulvaney, who now serves as President Donald Trump’s acting chief of staff…Mulvaney, who has concurrently been in charge of the White House Office of Management and Budget (OMB), is a longtime friend of the payday lenders. (The industry donated more than $60,000 to his campaigns when Mulvaney was a congressman from South Carolina.) While in charge of the CFPB, Mulvaney quietly closed investigations and scrapped lawsuits aimed at payday lenders around the country.

The FDIC rule would override a 2nd Circuit ruling, Madden v. Midland Funding, that says state usury laws can follow a loan around even if they’re sold to an out-of-state buyer. The FDIC rule is based on a controversial doctrine called “valid-when-made”: As long as a loan starts out legit, the bank can sell it on, with the same interest, to anyone. If the bank lends you a dollar at 1,000 percent interest—a real rate that payday lenders actually charge—and they’re not bound by the state rule, anyone can buy that loan from the bank and keep charging that 1000 percent. According to the National Consumer Law Center, which calls the FDIC rule the “rent-a-bank” proposal, at least five FDIC-regulated banks are now facilitating ultra-high-interest loans in 30 or more states. The motivation is obvious: The banks get a cut of a hugely profitable business.

Payday loans have been a tough industry to regulate. From a 2013 ProPublica report reprinted in Mother Jones:

In 2008, payday lenders suffered a major defeat when the Ohio legislature banned high-cost loans. That same year, they lost again when they dumped more than $20 million into an effort to roll back the law: The public voted against it by nearly two-to-one.

It’s just one example of the industry’s resilience. In state after state where lenders have confronted unwanted regulation, they have found ways to continue to deliver high-cost loans.

Importantly, California passed its Fair Access to Credit Act last October, setting the same 36-percent limit as South Dakota on consumer loans. The California bill doesn’t apply to loans below $2,500, but California, which boasts a bigger economy that most countries, is often a bellwether for national regulations. The timing of the FDIC proposal—a month after the Fair Access bill passed—suggests the California law may have been the final straw for Trump’s regulators.

Still, both payday lenders and bankers have backed a version of the FDIC rule for years. And although payday lenders have a lobby—which brags about its access to the White House and includes some major Trump fundraisers—it’s nothing like the lobbying power wielded by the biggest banks, whose alumni line every Trump finance agency. Bankers hate the Madden ruling for its broader restrictions on buying and selling people’s debts, and they’re the real heavyweights in the push to relax federal rules on loan sales. The FDIC rule will help banks “bypass” the ruling, one financial services company wrote, which is “good news for all secondary loan markets.” Bankers were fighting for looser regulations on sketchy loans (hello, mortgage crisis) before check cashing shops existed.

Last Wednesday, the House Financial Services Committee, chaired by California Rep. Maxine Waters, heard arguments against the “rent-a-bank” rule and in favor of legislation to override it. A bill now before the committee, the Veterans and Consumers Fair Credit Act, would take South Dakota’s 36 percent cap nationwide. A federal law, which would supersede the Trump administration, is the only guaranteed fix to the loophole.

Payday loan bans have been widely popular, winning support from both liberals and conservatives. In a 2017 Pew survey, 70 percent of Americans agreed that payday loans need more regulation. Now, they’ll be tested in Congress, where the banking lobby spent $61 million last year and where 70 percent of lobbyists are former government staff. If the bill passes in the House, a handful of Republican votes could put most of that back in borrowers’ pockets, ending the cycle of repossessions, defaults, and wrecked credit that hound borrowers like Maxine Broken Nose.