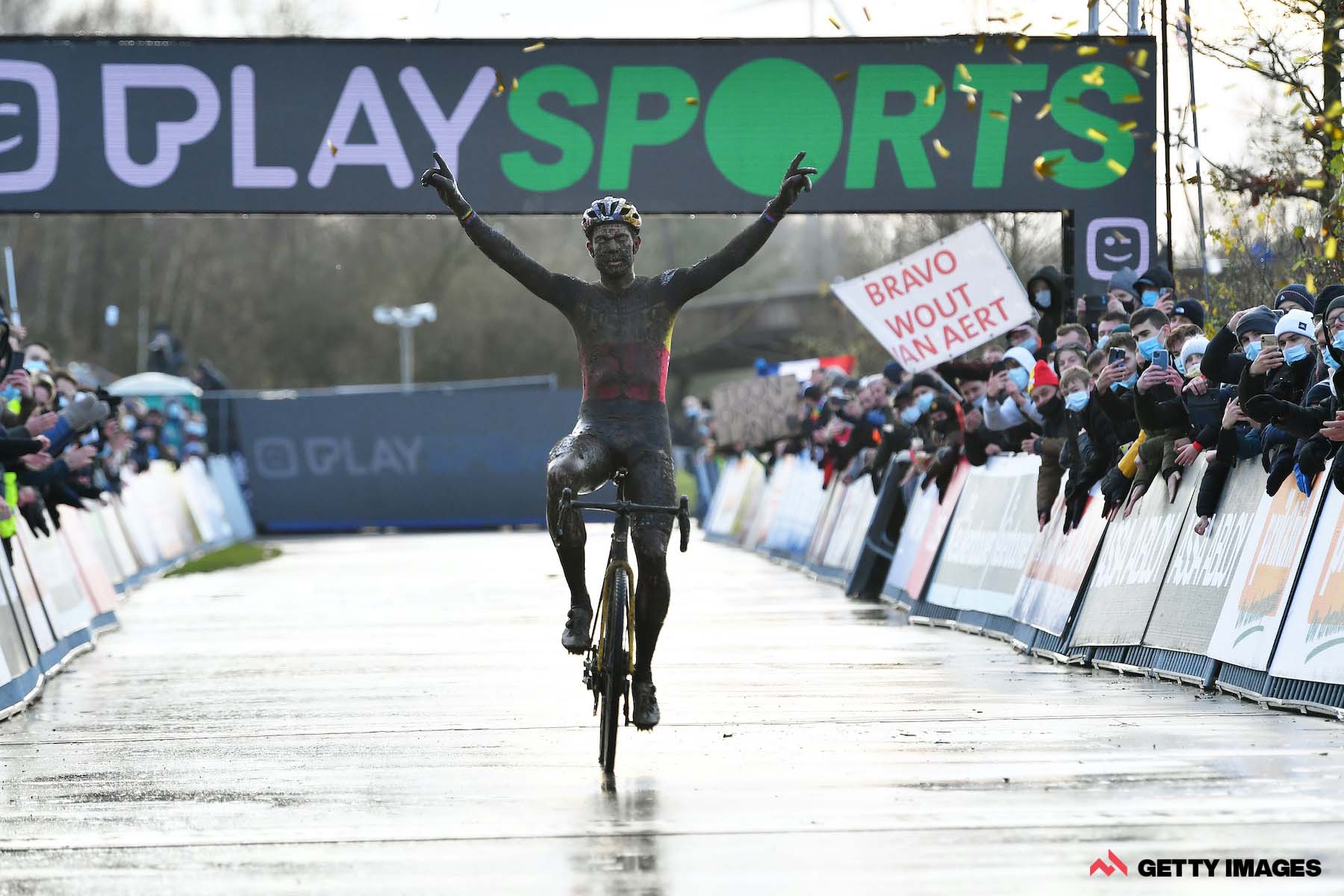 Wout van Aert’s Saturday got underway with him doubting his ability even to make the podium in his first cyclocross race of the season at Superprestige Boom. It ended atop the very podium he apparently didn’t believe in, after an hour spent proving stratospheric form.

“I had not expected this at all, of course not,” Van Aert said after the finish.

The Belgian national champion (CX and road) attacked on lap two of the incredibly muddy Boom course. He was soon joined by Toon Aerts (Baloise Trek Lions), but when the latter crashed on a slimy corner, Van Aert lit it up again, and that was it.

“I felt really good, so I was able to move up quickly,” Van Aert described the fast start to the race. “I just saw that after the technical zone I had a really big gap and it was a bit strange because we [he and Toon Aerts] were in front so I knew then something happened. From then on I tried to take my own rhythm because it was still a really long race. Apparently it was a bit faster than the guys behind me, so it was a perfect race.”

By the end of the third lap, the Jumbo-Visma rider already had almost a minute over his nearest rivals, and that gap only grew as the laps chugged by.

“Eventually I had to downshift a gear, but I still turned out to be faster than the rest.”

Van Aert carried 1:59 into the penultimate lap, which came in handy when he slid out on a muddy downhill section and landed heavily on his brand new bike. He got up pretty quick, slung his Cervelo R5-CX over his shoulder, and ran it into the nearby pits.

Van Aert crashed on a muddy descent on lap six, landing heavily on the chainstay of his new Cervelo R5-CX (one of many), rolling over the drivetrain as he tumbled backwards.

“The crash at the end was because I was starting to get tired,” Van Aert said. “I had a nice lead, but it is dangerous to lose concentration.

“It’s always better to stay on the bike. It was a really critical point on the course with a really steep descent and a sharp bend at the bottom. Even in dry circumstances it’s always a tricky one, so now it’s actually strange I only crashed once. I was always a bit afraid going down there but now I managed to stay on the bike for the other laps, which is good.”

As he coasted towards the finish line, Van Aert bent down and gave his bike a pat, like one would a horse at the end of a hard gallop, before accepting the celebration of the crowd.

“It’s my first race on the new Cervelo R5-CX,” he explained the unusual move, “and I think it’s pretty amazing to win on it only two days after the official launch, so I think it was nice appreciation of the rider to the bike because everything needs to be on the perfect level.”

Van Aert was, quite simply, a level above the competition who barely saw him all race. It bodes well for the rest of his ‘cross program.

“It’s really motivating to start the season like this,” he said. “I have a lot of races to come, but obviously starting with a win, it’s good for the motivation, and I’m looking forward to next weekend already.”