We Interviewed the Creator of @oldceline 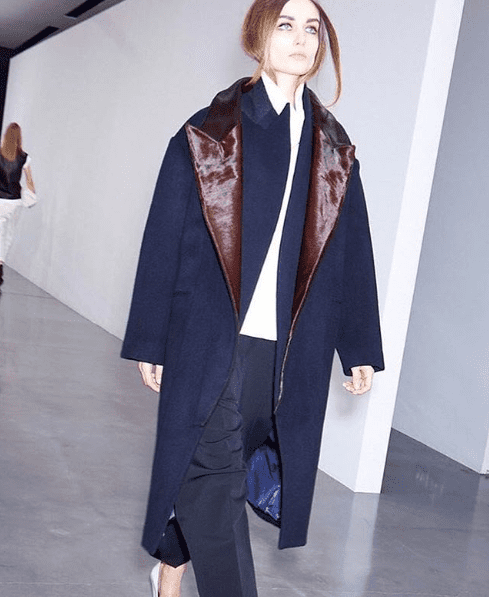 @oldceline first appeared on the internet on September 3rd, the day after the official Celine Instagram had been wiped clear to make way for the vision of incumbent creative director Hedi Slimane. Since then, @oldceline has become an online sanctuary where disciples of Phoebe Philo’s Celine come to indulge in collective nostalgia for the label’s stark, feminine power. Clothes from Philo’s era are quickly becoming a collector’s item; Business of Fashion reports that resale prices of Philo-era Celine have gone up by 30%. Influencers like Stella Vonseger, Laurel Pantin, Alyssa Coscarelli and Leandra Medine pay homage to Philo’s quiet brilliance by tagging @oldceline in their posts and in the process, the account has become a lightning rod for criticism levelled at Hedi Slimane.

In this exclusive interview, we spoke with the 22-year-old founder of @oldceline, Gabrielle Boucinha – who happens to be a former FASHION intern — about her future plans for @oldceline, and how it feels to become one of the most popular accounts on Instagram.

What was your motivation behind starting the @oldceline?

It’s fairly common for design houses to switch creative directors, but I’ve never seen the amount of backlash reserved for Hedi Slimane when he was announce he would succeed Phoebe Philo at Celine. With Celine, there is a huge community of people who genuinely do not want the new Celine, because of what Phoebe Philo represents. She promoted natural beauty at all ages (ed note: remember when her Spring 2015 campaign starred Joan Didion?) which was really progressive for a major fashion house. Celine was always about ‘less is more’ instead of ‘you need to buy this and this.’ Now that everything happening so quickly and every fashion house is more is more (ed’s note: ahem, Gucci), Celine was always less is more.

How did @oldceline begin? We noticed it showed up the day after the official Celine account was wiped.

I didn’t plan it, but it just happened that way. The first post on the new Celine account was September 2nd, and I started mine on September 3rd. I remember looking at the Celine Instagram and everything was gone and they started posting those black and white images.

So it was just a crazy coincidence then?

I had a web design project in my second year of school that I had that video saved from and realized ‘I have to post it.’ It’s from this digital design company based in NY called Work and Co that did the whole Celine website. I pretty much just have a lot of Celine images saved [on my computer] that I’ve always had.

Are you ever worried about running out of content?

Yes, but then again I can always look for more. There’s ten years of interviews, runway shows and campaigns from Phobe Philo’s era of Celine. So, I think there’s definitely enough. It’s really everything from 2008-2018.

How quickly did @oldceline grow after you started the account?

It all happened extremely fast. I remember for the first 3 weeks I had 2000 followers and then it went up to 10k. Then it went from 10k to 50k and now it’s at 97.9k. At the beginning it had a lot to do with the quality of the followers vs. the quantity. Even when I had only 2000 followers, there were a lot of fashion figures following it so people would click on the account and see ‘followed by Virgil Abloh and 100+ others following.’

So what’s been the most exciting thing to come from starting this account?

Just building this community that all feels the same way about Celine. One person messaged me and said “This is really important because we’ve never seen someone start an account for old Gucci or old Louis Vuitton when they switch creative directors.” It’s only for Celine. I think it’s a really political statement as well, because old Celine was designed by a woman for a woman, and Hedi’s Celine is like any other brand now.

What were your thoughts when Hedi was hired?

I was definitely disappointed. I knew it wouldn’t be the same as Phoebe’s Celine. I’m not even really interested in whatever the future of Celine is. It was just Phoebe’s era that I loved and I don’t think we’ll ever replace it. I think that’s how everyone following this account feels. That we’ve basically all left Celine.

Is frustration surrounding Hedi’s hiring specifically about him? Or is it a more general frustration that Phoebe Philo was replaced by a man?

I don’t think it’s specifically him, even though he’s turning it into the same thing he did at YSL. Even if they had hired someone else, it still wouldn’t be the same. It’s about the fact that Phoebe left and what’s gone is gone.

Where do you think the Philophiles will shop now that the golden era of Celine is over?

A lot of people say it’s all about The Row now. It’s the closest match, but The Row is a lot more expensive than Celine. Also Stella McCartney. A lot of it has to do with a woman designing for a womenswear brand, which there’s not too many of. So The Row, Stella McCartney, and Isabel Marant. I’d say those are my favourites.

Tell me a little bit more about your future plans for @oldceline?

I really want to make Old Celine its own brand, so I’ve been working really hard at branding it in a unique way. I’m designing a website where I’ll be selling merchandise like crew necks, sweaters, some bright acetate bags as well as some stickers to go with it. I was also thinking of doing my own shoots and having prints available. I could have released the sweaters weeks ago but I really wanted to make sure I loved the graphics and sourced it from a good manufacturer. It’s a lot to handle. I feel more anxious than excited because I just want to make sure everything is perfect.

The post We Interviewed the Creator of @oldceline appeared first on FASHION Magazine.