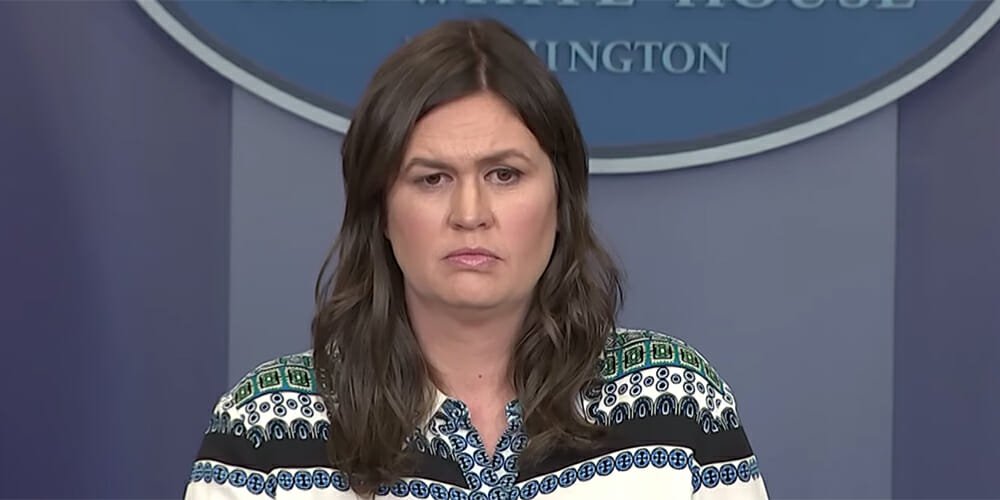 “As is standard operating procedure for a new president, the White House medical unit took possession of the president’s medical records,” Sanders said of the seizure.

The incident happened in February 2017, when then-director of Oval Office operations Keith Schiller and two other men arrived at Dr. Harold Bornstein’s office without appointment or notice and left with the president’s medical records.

“They must have been here for 25 or 30 minutes. It created a lot of chaos,” the doctor told NBC News, describing it as a “raid.”

Bornstein, who had been Trump’s personal doctor since 1980, went on to say that he felt “raped, frightened and sad.”

Responding to Bornstein’s comparing the seizing of records to “rape,” Sanders said that this was not her understanding of what happened and refused to address the doctor’s complaint beyond the White House’s official line on the matter that this was standard procedure.

“Those records were being transferred over to the White House Medical Unit, as requested,” Sanders said.

According to a source familiar with the incident who spoke to CNN, it was Bornstein who complicated the situation, “making a big deal about the request.”

“He seemed flustered and couldn’t operate his copy machine,” the person said.

Bornstein then reportedly handed over the original documents.

Now, he insists that taking the medical documents constituted a breach of patient privacy law under the Health Insurance Portability and Accountability Act since he did not receive a release form signed by Trump. Schiller, Trump’s former bodyguard who left his role at the White House in September 2017, did not respond to the network’s requests for comment.

CNN’s source said that Bornstein’s candid conversation with the press about his patient’s medical history was a key reason Trump asked that his records be taken and that Bornstein was presented with a formal letter from the White House physician’s office.

Two days before the so-called raid, Bornstein had told the New York Times how he prescribed Trump a hair growth drug, arguably offending Trump’s expectation of confidentiality, as well as drugs for rosacea and cholesterol. In comments to NBC News on Tuesday, it is clear that the doctor also understood this to be the motivation.

“I couldn’t believe anybody was making a big deal out of a drug to grow his hair that seemed to be so important,” he said of the potentially embarrassing titbit he’d initially offered up for publication. “And it certainly was not a breach of medical trust to tell somebody they take Propecia to grow their hair. What’s the matter with that?”

The doctor is also quoted in the article as having boasted to Trump’s assistant that he “should be the White House physician.”

Bornstein first thrust himself into the spotlight during Trump’s presidential campaign in 2015, writing a public letter in which he declared Trump “unequivocally” as “the healthiest individual ever elected to the presidency.”